Short term lending has received a great deal of negative press over the years with the likes of Wonga hitting the headlines for all the wrong reasons. This not only affected the brands that appeared negatively across the press and media, but it had much wider, further reaching consequences for consumer confidence and the short term loans market, to the extent that consumer confidence took some severe blows. However, a new flexible short term credit provider; Stepstone Credit are stepping up to the plate, as consumer confidence is back on the ascendancy.
Previously, there was little to no regulation across the payday and short term finance markets. This meant that numerous unscrupulous lenders and loan sharks moved in and capitalised on peoples’ genuine needs and requirements, causing a great deal of people from all over the UK to fall into a spiral of debt. However, in April 2014, the Financial Conduct Authority (FCA) stepped in and introduced regulations, covering the industry, ensuring consumers were able to have the confidence to borrow money again.
With the industry now having settled with this regulation of the market, Stepstone Credit has stepped out and is shaking things up for the better across short term lending. Using the latest technologies including bank scrape technology, Stepstone Credit is an FCA licenced credit facility that provides borrowers with up to £500 of credit as part of a facility rather than in the form of hard cash. This means that not only are lending decisions fairer due to the bank scrape, but only what is actually used from the facility is actually repaid, making it a much fairer product that other lenders.

How Does Stepstone Credit Work?

Traditional short term lenders such as those dominating the payday market use an established process. A prospective borrower requests via an online application to borrow an amount of money over a preferred period of time, having to repay by the end of this period, or over a fixed period if it is an instalment loan or similar. Then the borrower must fill out an extensive application process. Having gone through this process, the lender then makes a lending decision and the loan is either funded or rejected. Stepstone Credit though is different.
Stepstone makes the process much fairer, easier and more logical. Rather than having to apply for a specific amount as a cash loan that may or may not be used in full, a prospective borrower applies for a short term credit facility of up to £500. Once the application is submitted, a few simple personal details are needed. Then, the applicant provides Stepstone with authorisation to ‘scrape’ the last 3 months of bank transactions. This gives the lender the ability to simply view the last few months of financial dealings of the applicant’s bank account. 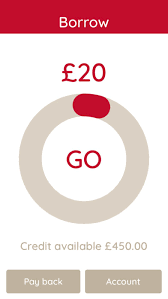 The major benefit of this process is that rather than basing a lending decision on questions which are sometimes falsely answered by desperate applicants, Stepstone acquires a much more accurate and relevant picture of an applicant’s finances. Therefore, the lending decision actually depends on the true affordability of the applicant rather than answers to generic questions. This also means that lenders can better afford to repay what they borrow as they are only provided with the applied facility if they can realistically afford repayments.
Upon approval, the applicant is provided with a facility of up to £500 credit. This means that rather than providing a loan which needs to be repaid in full plus interest, the borrower has the facility to ‘draw down’ what they need, when they need it out of their facility. The borrower then, only repays what they actually use. For example, if someone is approved for a facility of £500 but only uses £150, they are only required to repay that £150 plus interest, with the remaining £350 there to use when they need and they will not be charged or ‘set the repayment clock ticking’ until they draw down money from their facility.
Additionally, by being timely with one’s repayments, it is possible to improve your credit score and this is something that Stepstone are very proud of being able to facilitate through their service and product.

Stepstone Credit has a number of distinctly unique aspects of its very nature. It is these differences and its being FCA licenced, that set it apart from so many other lenders:
Bank Scrape Technology – This encrypted technology allows lending decisions to be made on the basis of the applicant’s true affordability rather than just their credit history and current credit score. For example, someone who has a County Court Judgement (CCJ) that excludes them from other loans, may not necessarily be rejected by Stepstone. It may well be the case that financially they are stable and sound but they simply had a hiccup many months ago with Stepstone, one’s financial past does not always dictate their future.
Mobile Technology – Rather than being solely based online, Stepstone Credit allows users to fully harness and utilise mobile app technology. Through their carefully and specially designed app, borrowers are able to manage and repay their accounts and can also draw down what they need via the app, as opposed to having to wait for the money to come into an account. Also, by utilising their mobile app, users can experience everything in real-time with no delays.

Target Audiences – Although targeting anyone who needs to borrow up to £500 over a period of up to 3 months, one of the core customers of Stepstone are those known as ‘pressured professionals.’ These are people who have a stable job with a reasonable income but who just need that bit extra to tide them over and help them out. Unlike many payday applicants, a pressured professional is usually able to easily repay a loan or credit facility.
Nature of the Product – Traditional short term loans such as payday loans require the borrower to repay everything they borrow plus interest, whether they have used it all up or not. A borrower may borrow £500 from a payday lender, yet only use £300. They are still required to repay the £500 plus its total interest to repay the loan in full. With Stepstone though, credit facility is taken out and only what is drawn down is actually repaid, leaving the rest available for as and when it is required.
Early Repayments – Many short term lenders do not like early repayments and therefore charge extra for this. Often, they do this in order to tie borrowers into interest repayments and their ‘lending model.’ Stepstone Credit however encourage sensible credit and financial behaviour. Therefore, early repayments are free of charge and are looked upon positively for future applications.
Rewarding Good Practices – Uniquely, those who are timely or even early with their repayments with Stepstone Credit, are rewarded with lower interest rates each subsequent time they acquire a credit facility, making whatever they draw down thereafter much cheaper.