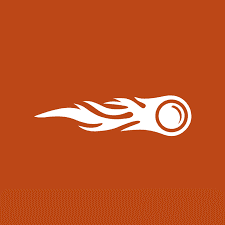 With the Brexit deadline on the horizon and businesses across the UK planning and preparing for the necessary opportunities, SEMrush discover what businesses are looking for and their intentions.

London: October 2018 – As the Brexit deadline looms, trends data provider SEMrush reveals the numbers on searches relating to business concerns since the July 2016 decision to leave the EU.

The findings point to public concern over Brexit’s implications for business, with a series of dramatic peaks in search terms mirroring landmark moments in the process since the 2016 referendum.

There was also a dramatic surge in interest when the High Court ruled that the government must consult Parliament before triggering article 50, in November 2016. For example, searches for the term ‘how does Brexit affect businesses’ doubled between September and October 2016 and then doubled again in November that year.

When article 50 was actually triggered in March 2017, a similar pattern emerged. Searches for ‘how will Brexit affect businesses’ more than doubled between February and March, while searches for the term ‘Brexit impact on business’ has grown by 49% in comparison to the previous month before.

The most recent spike in Brexit and business search terms came in September last year, when Prime Minister Theresa May gave a speech in Florence outlining a proposal to delay full Brexit until 2021.  During that month searches once again more than doubled for terms such as ‘impact of Brexit on UK businesses’ and ‘Brexit affecting business’. Interestingly, searches for the term ‘Starting a business UK’  fell during this period, hinting at a lack of confidence in the region. 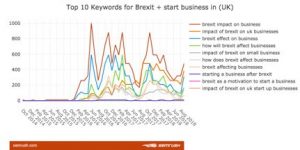 Overall, the figures show a trend towards more interest in the subject across the board in the 18 months following the decision to leave, with a slight dip in most search terms in the first half of this year. Notable exceptions to this trend are the terms ‘Impact of Brexit on UK business’ and ‘Impact of Brexit on small business’ suggesting ongoing concerns and questions among these groups. 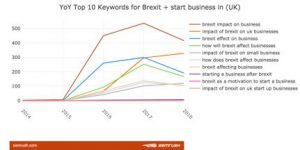 In the build up to the referendum, there was also an interesting spike in UK searches related to starting a business abroad.

Ahead of the vote, the data recorded a huge surge in search activity regarding founding a business in Dubai, followed by another larger, sustained spike when the result of the referendum was announced. The data suggests that British entrepreneurs are looking to Dubai and a number of other countries to found their businesses, including Australia, Ireland and France. 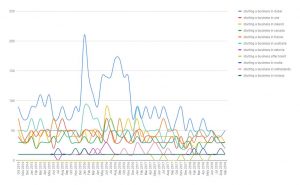 SEMrush is leading digital marketing toolkit for SEO, PPC and content marketing professionals worldwide. With over 30 tools within their software, search data for over 140 countries and seamless integration with Google services, SEMrush provides solutions for in-house marketing teams and agencies that work with clients in any industry.