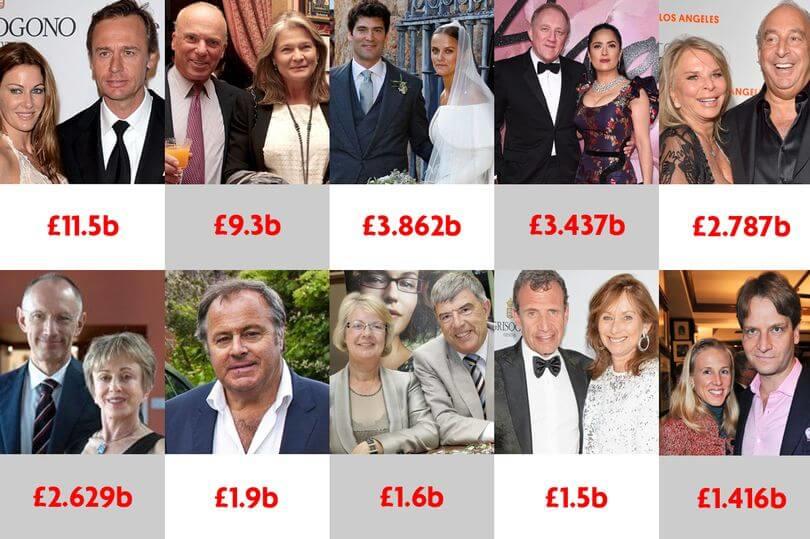 Be male, born overseas and have your money in property: what it takes to get to the top of the Rich List

Analysis of the richest 250 entrepreneurs in each of the last five years reveals:

>Download the data here
Want to end up on the Sunday Times Rich List? It helps if you’re a male, London-based property magnate, according to new research analysing the make-up of the country’s top 250 entrepreneurs over each of the last five years. The findings also reveal that originally being born outside the UK, with a spare £12.8 billion will usually see you top the pile of the UK’s mega-rich.

With the publishing of the 2017 Rich List fast approaching, projections estimate a ‘mere’ £113 million[1] will be required to feature in this year’s edition, which details the 1,000 richest people in Britain.

The research from online start-up magazine TechRound also found the combined worth of Britain’s top 250 wealthiest individuals and families is likely to reach £467 billion this year, before surpassing the half a trillion mark (£507 billion) in 2018[2].

Perhaps suggesting a lack of gender equality, there has been no marked increase in the total number of women within the top 250 over the last five years and at the current rate, there would not be an even split until the year 2224[3]. In fact, just over one in 10 are female (12%), of which just two in five (40%) are not listed alongside a male relative or spouse.
Continuing this theme, the very top entries each year are also predominantly men – the highest placed woman, Kirsty Bertarelli, averages a sixth-place ranking. However, the former Miss UK’s £9.8 billion fortune is combined with her husband, pharmaceutical billionaire Ernesto, and so the highest-ranked individual woman over the last five years has been Baroness Howard de Walden, whose role controlling the Howard de Walden London property empire places her at an average 29th place, worth £3.6 billion in 2016.

The most popular source of wealth over the last five years has been from property, with almost a quarter of the top 250 entries in each year (23%) making at least some of their fortune within this industry. This is a rising trend with 21% more members on the list citing bricks and mortar as their main source of wealth last year, compared with 2012.
Other popular industries for Britain’s super-rich include finance (9% in 2016), with pharmaceuticals and hedge funds on 3% each. The latter industries have grown in popularity over the last five years, overtaking oil, which was half as popular in 2016 than three years previous[4].

Not everyone on the list has obtained their wealth through these traditional avenues though – Bernie Ecclestone’s ex-wife Slavica (worth £740 million) features in each of the last five editions, despite her source of wealth being listed simply as “divorce” and an average of seven of the top 250 individuals (3%) in each Rich List inherited their fortune.

Despite being a catalogue of Britain’s richest people, the upper echelons of the list are dominated by those born outside the UK. Over the last five years, just 8% of the top 10 has been made up of Brits and no native Briton has made it higher than the third-place Weston family in 2015, having made their fortune in retailing.
However, the research found that English entrepreneurs still make up the bulk of the top 250, with the most popular birthplaces being:

In fact, with less than a third of a percent of members across the last five years, Northern Ireland is beaten by the likes of Syria (1%), Kenya (0.9%) and Tanzania (0.4%). Wales (1.2%) does not fare a great deal better, with 11 non-British countries home to more entries on the list, including Russia, Pakistan and Norway.

The number of entries from individuals has decreased by 17% between 2012-2016[5], suggesting going into business with family helps grab a place on the list. In fact, an average of 91 out of the top 250 are families, rather than wealthy individuals.

Daniel Tannenbaum, Founder of TechRound said, “It is fascinating to dive so deeply into what it takes to be listed among Britain’s wealthiest individuals. We have seen an explosion in the tech industry in recent years, so it is perhaps surprising to see that property endures and still takes top spot among Britain’s wealthiest individuals.
“It will be interesting to see what this year’s list throws up and whether some of these trends continue in 2017.”

1Based on compound interest calculations accounting for the worth of the 1,000th person on the Rich List between 2012-2016.

2Based on compound interest calculations for the total worth of the top 250 members of the Rich List between 2012-2016.

3Based on compound interest calculations accounting for the growth in the number of female entries on the Rich List between 2012-2016.

How To Create A Successful Blog For a Start-Up