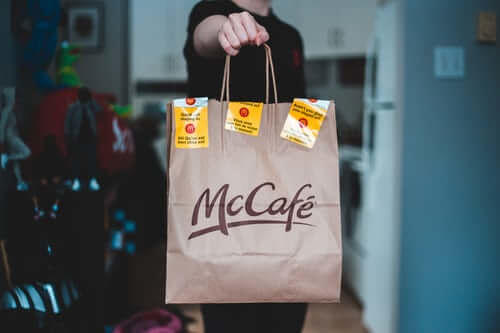 Using data from Google, Betway Online have revealed the dishes that people around the world have been getting delivered while restaurants have been closed. People all over the world have had to spend plenty of time at home over the last three months. And, with restrictions on shopping and supermarket deliveries in higher demand than ever before, it’s no wonder that many have embraced the comfort of takeaway meals during these times.

According to Google Keyword Planner, worldwide searches for ‘delivery’, ‘food delivery’, ‘takeaway’ and ‘takeout’ rose by almost 300 per cent between March and May. But which countries have ordered in the most often? And what type of food have they been craving? Our research reveals all…

Which Takeaway Food Has Been the Most Popular During Lockdown? 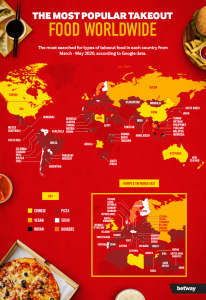 Figures show that pizza was the most-searched food in 55 of the 81 countries for which data was available. It has proven particularly popular in eastern Europe, with Belarus carrying out the most searches for ‘pizza delivery’ per capita according to Google Trends.

Russia and Ukraine, meanwhile, were fourth and fifth respectively.

Interestingly, vegan food was the most-searched term in Russia; the only time it appeared in the top two searches for any country in the world. That could have something to do with the fact that it’s common practice for followers of the Russian Orthodox church, who make up 71 per cent of the Russian population according to a 2017 survey, to eat a plant-based diet during Lent, which ran from 26 February – 9 April this year.

Chinese was the next-most popular takeaway after pizza, topping the charts in 11 countries, including the USA, Canada, United Kingdom, Republic of Ireland and, unsurprisingly, China. In fact, when looking at the cities that searched for the term the most, all of the top eight were in English-speaking countries.

Instead, it was Denmark that scoffed the most sushi per person. Considering that raw, pickled and smoked fish have been staples of the Danish diet since the Viking era, perhaps its popularity is understandable. With nearby Norway being the largest salmon-producing nation in the world, there is also plenty to go around.

Which Takeaway Brands Are People Searching For?

Given its ubiquity across the world, it’s unsurprising that McDonald’s dominated searches for branded fast food companies. The burger-flipping giant is the world’s largest restaurant chain in terms of revenue and, as of 2018, had 37,855 outlets in 100 different countries.

But the country that most craved the Colonel’s secret blend of herbs and spices was Malaysia, amassing an average of 301,000 searches per month, more than any other country. It is estimated that KFC serves 25m customers every month in Malaysia, only 6.5m fewer than its entire population.

The menu offers various localised items like rice congee, a type of porridge and teh Tarik, a milky tea that is popular in southeast Asia. The most popular company in one specific place was Pizza Hut in the USA, which averaged 1.83m searches per month between March and May.

Which Countries Are Ordering The Most Takeaway Food? 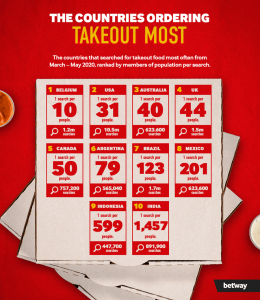 According to data from Google Keyword Planner, there were 26.6m searches for ‘delivery’, ‘food delivery’, ‘takeaway’ and ‘takeout’ between March and May, with the USA accounting for 10.5m (39%) of them alone. But per capita, the USA only ranked second among the countries with the highest volume of searches, with one for every 31 members of the population during the three-month period.

Topping the charts was Belgium, with one search for every 10 people. Next on the list were Australia and the United Kingdom, with one in 40 and one in 44 respectively. Despite recording the fifth-most searches for takeout food among the top 10 countries, India had the fewest per capita with one for every 1,457 people.

How Has Demand For Takeaway Food Changed During Coronavirus? 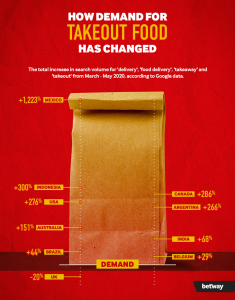 Unsurprisingly, with restaurants having to close their doors, the popularity of ordering in has skyrocketed in most countries. There were three-figure percentage increases in six of the 10 countries that searched for takeout food the most. The country that saw the biggest spike was Mexico, with monthly searches increasing by 1,223 per cent. According to Google Keyword Planner, there were 31,480 in March compared to 416,400 in May.

The reason for this is probably the late closure of restaurants in Mexico, with most places shutting their doors on 23 March. Interestingly, despite posting the third-highest search volume between March and May, the United Kingdom was the only nation in the top 10 whose demand for takeaway food actually decreased during the same period, by a total of 20 per cent.

How Are People Ordering Their Food? 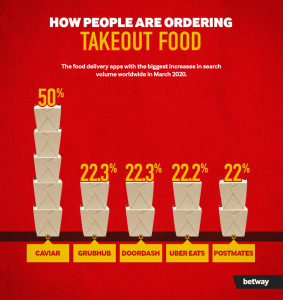 With USA dominating the volume of searches, it’s no surprise that the most popular takeout food apps over the last three months have all been American companies. Caviar, a food delivery service operating in 11 different states including New York, Texas and California saw the biggest increase in search traffic worldwide with numbers increasing by half in March. Searches for Uber Eats increased by 22.2 per cent, while it was also the only app in the top five that was more popular outside the USA. Uber Eats is available in over 6,000 cities across 45 countries and per capita, was searched for the most in Taiwan.