2gether is a crypto-trading app available in 22 countries in Europe, in which traders and beginners buy and sell cryptocurrencies at real market prices in one click. 2gether was founded in 2017 by Salvador Casquero and Luis Estrada, professionals with extensive experience in the financial sector and great expertise in digitization of business.

With over 100,000 users and a monthly transaction volume of more than 60 million euros, 2gether is one of first Spanish and European fintech companies to launch its own token, the 2GT, and in creating a VISA card to work with a cardholder’s cryptocurrencies.

The company has achieved a great reception among cryptocurrency traders in Europe by offering a service without commissions and at real market price, allowing them to buy 19 cryptocurrencies in less than two clicks from their mobile phones. Moreover, 2gether users are rewarded every time they contribute to the platform in 2GT, the company’s native token. 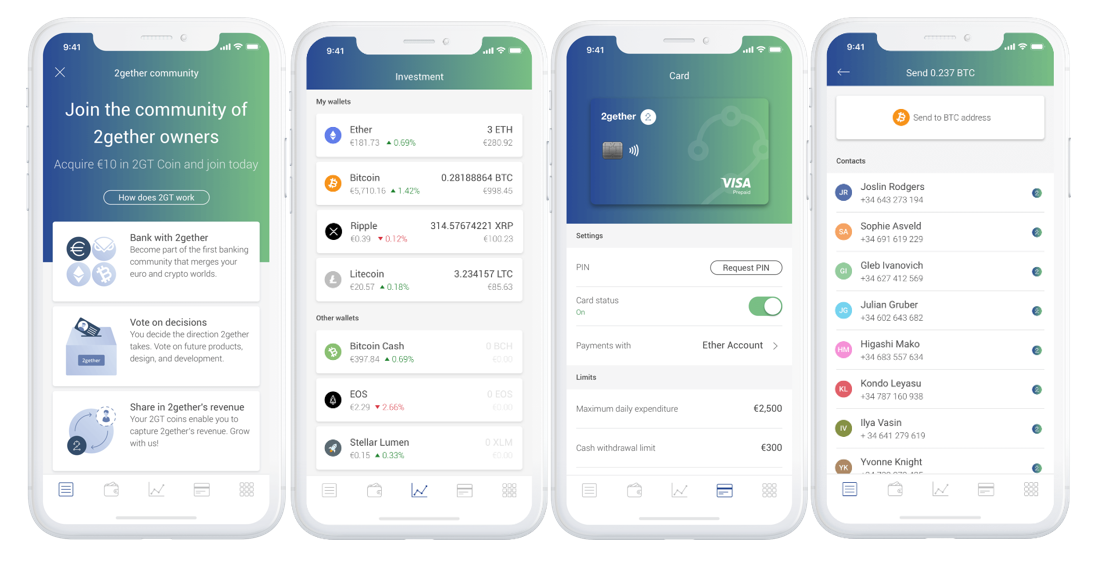 2015: The “Papaíto”, the token that inspired the universe of 2gether

Over the summer of 2015, Salva Casquero, founder and president of 2gether, transformed his home economy by creating the Papaitos Coin, a token that rewarded his children, giving them various redemption and exchange options so that they could make the most of it. This experience led to the birth of 2gether and the 2GT token.

Salvador Casquero and Luis Estrada founded 2gether with the goal of building a platform that allows us to revolutionize the global economy in 2017. Both are firm believers in the endless possibilities of a tokenized economy and are passionate about blockchain technology.

In 2018, Ramón Ferraz joined the team as CEO of 2gether. With him on board, the beta version of the app and the 2GT, the token of the company, was launched in Spain. In 2019, the 2gether app became available in the 22 countries in the Eurozone. During the first six months, 2gether grew 300% without investing on paid advertising. Nowadays, more than 100,000 users trade more than €60M per month.

How has the company evolved during the pandemic

When the COVID-19 pandemic began, BTC, like many other assets, suffered heavy losses. In a global crisis, there is no safe store of value. However, as centralized assets like stocks and commodities lost a lot of value early on, turning COVID-19 into an economic crisis, BTC regained its store-of-value reputation and thus interest in buying it rose.

Bitcoin fundamentals dictate that cryptocurrency is supposed to be recession-proof—not crash-proof. When a global pandemic puts millions out of work, shuttering the global economy, and quite literally quarantining entire populations, it’s understandable and expected that peoples’ first instinct will be to sell off their assets for cold, hard cash. Survival comes first, and bitcoin isn’t going to buy you toilet paper or hand sanitizer. As the global economy deteriorated, and inflation set in, investors were likely to look to tangible assets such as gold and real estate, as well as bitcoin, the best-performing asset of the past ten years.

As the crisis progressed, we witnessed the biggest boom in cryptocurrencies since 2017. This has had a very positive impact on 2gether. This year we doubled our user base, reaching 100,000 users and we have tripled our transaction volume in the last three months, reaching €61 million in monthly trade volume.

But our journey through the crisis hasn’t been without its speed bumps. We have had to solve several logistical problems caused by the hyper-growth, but this has led us to improve and bolster the app more rapidly.

During the pandemic, we experienced one of the hardest blows to the company. In July 2020, we suffered a cyber-attack by a third party in which €1.2M was stolen. But thanks to the support of the community and transparent management, six months after the incident the company managed to compensate the funds of 98 percent of the affected users and emerge from the crisis more agile and more secure against malicious attacks.

What can we hope to see from 2gether in the future?

In February 2021, 2gether issued its own token “2GT.” This year the company will concentrate its efforts on increasing the awareness, accessibility and liquidity of the 2GT in the crypto market. In the coming months, we will see 2GT listed on new decentralised exchanges such as 1inch and Balancer, and new stacking and farming initiatives around 2GT.

The company will go one step further in its mission to build the platform that will allow us to transform the global economy and will offer a new service to entrepreneurs, organisations or individuals who want to create their own token and create their own self-sustainable economy.

To this end, 2gether is setting up a new department that will be dedicated to the study of the token and tokenized models, applied to the real world. This new service will add a new layer of utility to the 2GT, wherein it will be utilized as the gas in all transactions on the platform.

Interview with Paramjit Uppal, CEO and Founder at AND Digital

Meet The Founder at Inside Out Drinks: Helping You Pre-Tox Before You Drink