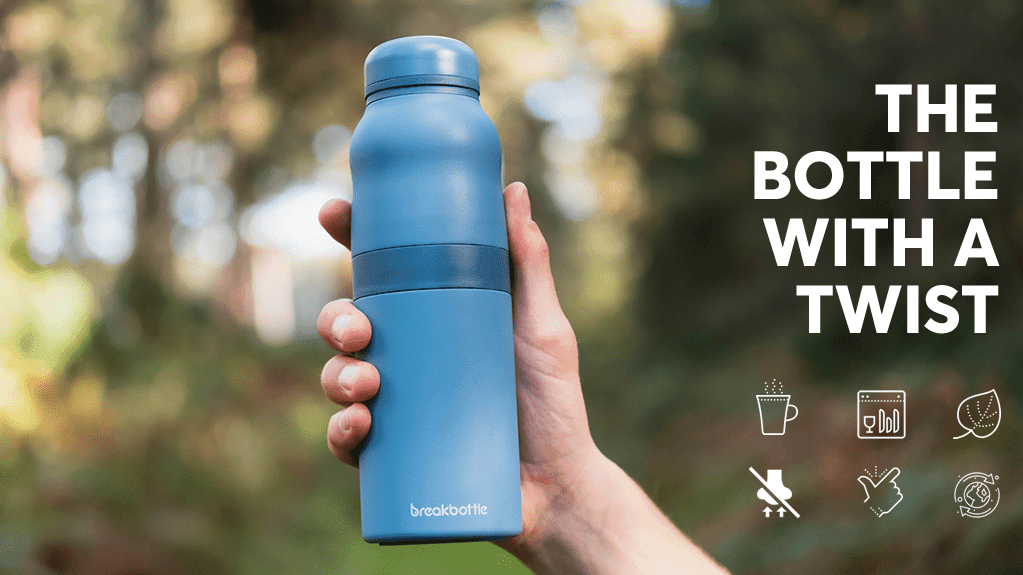 Tell us about Breakbottle, how did it come about?

We are all increasingly adopting sustainable and reusable products, yet over 80% of reusable bottle users think that their bottles could be easier to clean and maintain. Breakbottle is for those out there wanting to get their hands on a high-performance reusable bottle that’s actually easy to clean- helping users save waste, save time and stay healthy.

The idea was driven by my own frustration at being unable to clean, dry and maintain my own bottle without having to create additional waste (with brushes), follow some bizarre cleaning ritual (baking soda, boiling water etc.) or to use something else for my water intake which would compromise on either the functionality, performance or design aesthetic. After another morning struggling to clean a smelly bottle, I came up with a sketch which turned into a digital render and then after some IP guidance used this to pitch my idea to a few designers, one of which I have been working with ever since.

I would say that problem solving, staying healthy and making a positive impact have always played a big part in my life. With Breakbottle, I hope to solve a problem for our audience which helps keep their reusable bottle fresh, in turn helping them stay healthy and also bring them in as part of a wider mission and community.

We launched via Kickstarter in October and are expecting delivery later next year. Now that it’s (nearly) out in the real world, I can’t wait to watch it grow over the next few years.

As a sole founder, there are lots of different ‘hats’ you need to wear to get the business off the ground and so a key challenge is prioritising what the business needs and also being able to identify the areas you can knuckle down, skill up and perform yourself and those that you’re going to need assistance with.

Starting lean is hard as there’s always so many tempting ways to improve your business at a cost- but you just have to be selective and only outsource help for those aspects that are both fundamental to the business and that you can’t perform to the required standard yourself. Knowing what to learn yourself is also really important.

Also, whilst many businesses start with an innovative idea, getting that concept in front of the right people is inevitably a challenge. Luckily, nowadays we have many options to get our products/ideas/creations in front of potential customers. We used Kickstarter to connect us with early adopters, validate our product-market fit and build a community.

Although Kickstarter is a great platform for connecting creators to a community of people who believe in and back your idea, there’s a whole process that builds up to running a successful campaign and navigating that can be tricky. There are loads of resources online, however I found that the book ‘Crowdfunded’ by Mark Pecota was probably the best overall summary and starting point for those looking to learn more.

It can be a lonely road at times, but you’ll be surprised at how helpful people will be when you ask, particularly those who have been through a similar process. My advice would be take action, tap into your extended network and stay positive; remembering that things rarely go exactly to plan.

What can we hope to see from Breakbottle in the future?

We are hoping to build on the success of the Kickstarter launch and continue to expand our community both on the direct-to-consumer front but also working with like-minded businesses too. We’ll be running a campaign on Japan’s equivalent of Kickstarter around April time and then once we have physical bottles available later in the year, we’ll be well placed to test the different strategies in mind in the post-Kickstarter market.

Ultimately, I see Breakbottle becoming a brand which brings a positive impact to its community beyond the bottle itself. Whilst the initial product offering is to make an easy-clean bottle which solves a problem for a lot of people, I want to be able to build a brand which breaks down the barriers to low-waste, healthier drinking in general through expanding our product range and other collaborations.

There are plenty ideas in the pipeline however I’m trying to take things as they come. Since the business is still in its infancy, I want to just continue to build traction and then base any actions on real-life metrics as opposed to larger scale pipe-dreams which it can be easy to get carried away with. So, for now I’m focussing on what I have in front of me whilst keeping the longer-term objectives in mind.

We’re very excited for what is to come and are still taking pre-orders on Indiegogo now for anyone who wants to check us out in the meantime.

A Chat with Sarah King, Co-Founder At Women’s Startup, Accelerator & Investment Movement: we are radikl