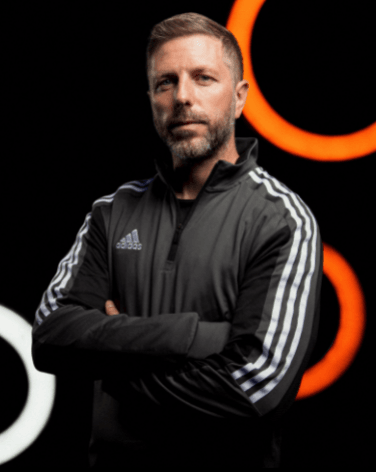 The scientist was based in Newcastle on a sabbatical, I asked him the question and it turns out he didn’t know, so we got to work! We did a study with Durham University and some future players from Durham County Cricket Club, we got them batting at 99mph within an hour and a half by putting them in at different light levels, so we knew we had a secret weapon.

Where did the idea come from?

We eventually built a team with my mentor who invested in the system, we got an engineer on board and built the Okkulo system. It’s been twenty years in the making, it’s come from the trials with Durham University, we did five of them and they were all brilliant, so we knew we had something unique and built the system.

Then we went to Manchester Metropolitan University, working with a Premier League teams R&D team and Salford City, where we ended up turning their goalkeeper into the best performing ‘keeper in all of the professional football leagues in the UK within four months. It started in a nature magazine, before we built a system ready for the Premier League.

In between that we did lots of testing, with lots of players and made them all excel, with not marginal but significant gains.

How has Okkulo had to evolve during the pandemic

We’ve had to adapt like everyone else, we couldn’t get Premier League teams into the system because of the COVID bubbles, so we had to get them in when we could around their bubbles. We worked with a Premier League team at a university who thankfully allowed us to work from there.

We’ve had to change strategy slightly, we are going to the U.S, we’re going to work with MLB (Major League Baseball) teams. It’s always hard to introduce technology into sport, we know that and particularly with technology that hasn’t been done before, that the Clubs haven’t heard of, that makes it extra difficult, then on top of that we’ve had COVID. So we’ve adapted by altering the strategy, by going to the U.S. where people are more receptive and more open to the technology, which saves us some time because we’ve eaten up quite a bit of money in the process.

What can we hope to see from Okkulo in the future?

We apply ourselves to every sport, not just football, baseball and basketball. We can do skiing, any sport where it’s reactive, anything that’s in front of you and needs perception. Okkulo will get smaller, we’re going to be in homes, gyms, schools, we know exactly what we’re doing, I’ve already been testing that out, there’s a lot of things to come from Okkulo.

It’s here to stay and we’re going to change how people train behind the eyes, from the visual cortex to the muscles. It’s a simple strategy and it’s a simple step-by- step process to get those extra significant gains.