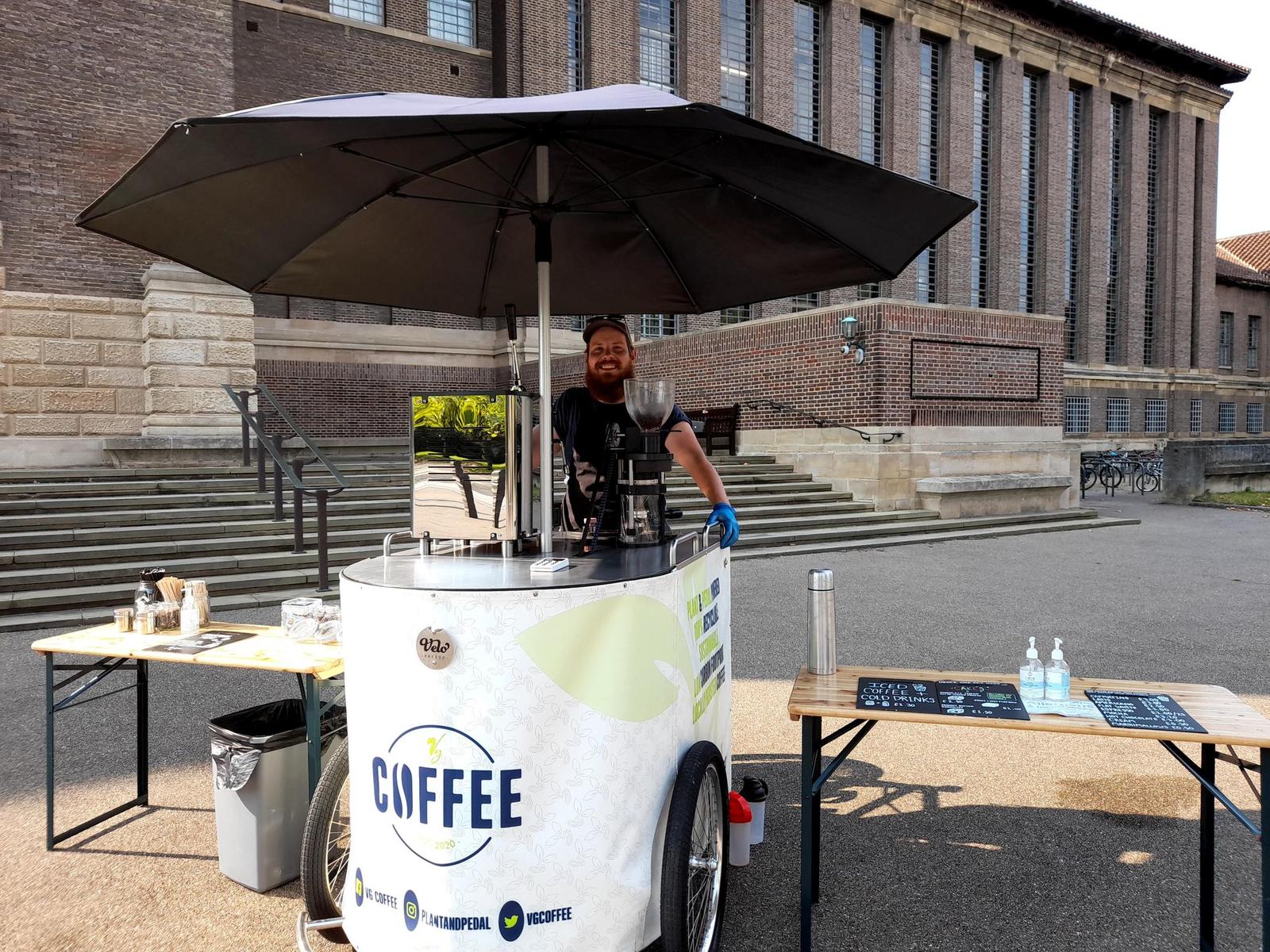 We spoke to Tom Ross, who has bravely launched a local coffee startup in Cambridge during lockdown. He had an incredible story to tell about the impetus behind the business.

Tell me a bit about VG coffee

“It is a mobile, plant-based coffee-and-cake bike – bit of a mouthful – and in fact it’s actually a trike, with three wheels. The idea behind it is to bring a tasty coffee with a low carbon footprint to the people. I’ve been running coffee shops for about ten years and I’ve always planned to do my own. I came across this opportunity earlier this year, from a friend. We met while I was in Starbucks in Addenbrookes hospital, which I was managing before I was laid off through furlough.

“I’m the nutter who launched a business during lockdown.” 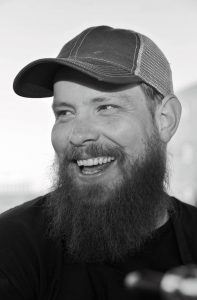 What was the impetus for starting the business?

“I’ve been wanting to do my own business for a long time now. Running successful coffee shops for almost ten years, I knew how to run them, I knew how profitable they could be and I was waiting for my capital to come – in the form of compensation from an accident that I had in a rented apartment in Brighton… I fell from a balcony, not doing anything silly, not drunk, just FaceTiming my mum, she’d just got back from Greece and I said ‘hey Mum, how was your holidaaaa…’ and I fell because the railings were rusted through. That was five years ago this September. I was impaled through both my legs… stuck on the railing for a while, conscious the whole time, making jokes throughout.

“I spent about six months learning to walk again, a lot of time with psychiatrists for PTSD and I have depression and anxiety every day. But it’s okay, it means I’m alive.

“To live is to suffer. Every day when I wake up and feel like I’m in pain or I’m suffering, I know I’m alive and I’m grateful for that fact.”

“I’m also grateful for the compensation money, which then enabled me to buy this. So I bought this small business in January and I was ready to go around March time but there was lockdown so that gave me a bit more time to fine-tune things. And then we launched about three months ago.” 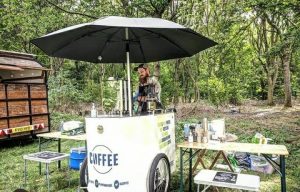 Pitching at a festival

How unique is your business model?

“The trike itself is made by a company called Velopresso, and they have just finished creating their twenty-seventh bike which has gone to America. As far as I know, there are only four of these bikes in the UK and what makes them more unique than other mobile coffee shops is the pedal-powered grinder and the pedal-powered water pump.

“When this opportunity came along – low carbon footprint, exercise, using my legs that I’m very lucky to still have, a reasonable price – I took the plunge and formed a business.”

What is your proudest moment?

“I have two best moments. Obviously launch day, our first gig at the Clay Farm garden and then celebrating with champagne afterwards, as you do. And one of my proudest moments was when we did a gig at the Wild Wood Disco, a small festival… it was a really nice setup and that day my partner Aurora was working with me as well. At the festival, we just clicked in our serving style. It’s been three months and everything is still new to both of us, but that day, everything just went smoothly and we were just reading each other and bouncing off each other. It was a) the most money we’ve taken in a day and b) the smoothest operation.

“I had a great sense of pride and achievement after that one.” 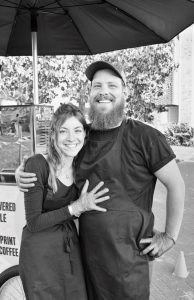 What are your hopes and plans for the future of VG coffee?

“It will be to expand and one day have a fixed café serving sandwiches, paninis, cakes, coffee. But that’s more long-term, when I’m ready to be fixed down to a place. I would love to live back in Brighton. When it turns into a coffee shop, it will no longer be pedal-powered, but the next stage in the expansion process is to either buy a trailer, which won’t be pedal-powered, or do I get another bike?

“So I’m leaning towards buying another bike, and having my partner by my side, both of us pedalling one. I think it would be really fun and quite cute as well.”