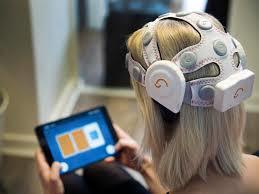 BrainWaveBank, a Belfast-based AI startup, has raised €1.2 million (£1 million) to further develop, test and certify an AI cap that could help diagnose and monitor neurological disorders faster and more accurately.

The latest funding round was led by Par Equity, together with Techstart Ventures, Co-Fund II, Angel CoFund and British Business Investments, and it will support further developments in the technology, as well as bigger commercial activities and clinical trials.

The technology they have developed allows for the easy and remote home-assessment of both neurodegenerative diseases and psychiatric disorders. It connects a wireless headset to a series of gamified neurocognitive tests that can be played on a tablet, whose results and data will then be gathered on a cloud-based analytics platform.

The neoprene device is a wearable electroencephalography (EEG) cap that measures and monitors, in a non-invasive way, the mechanisms that underpin neurological disorders and therapies.

While the BrainWaveBank platform offers secure gathering, storage and analysis of data from thousands of users, and it builds neurocognitive profiles for individuals, populations and different demographic groups.

The startup, which was founded in 2015, believes that the platform’s individual-level data could provide users with personalised insights into their cognitive health, while group-level figures could support clinical trials, as well as the development of new therapies and diagnostics worldwide.

BrainWaveBank is now developing brain-based biomarkers for different use-cases, like early detection of brain disorders, treatment-response-tracking and stratification of patient groups. At present, its clients include pharmaceutical and biotech companies, as well as university and teaching hospitals. The startup has recently secured a series of contracts with companies that would like to use the technology to gain insights into the effect of drugs during early-stage clinical evaluations of new therapies for Alzheimer’s disease and other psychiatric conditions.