How to do the triangle dance 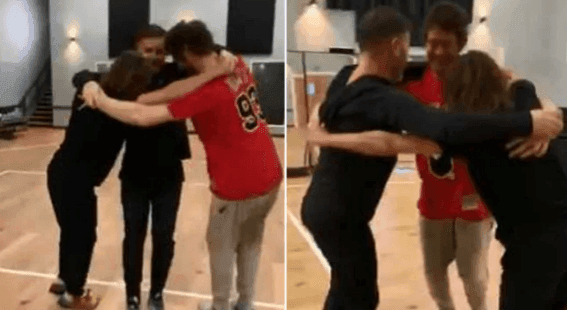 There is a new dance craze that is taking over the world. No, it isn’t flossing, it is the Triangle challenge that is now the dance everyone is going nuts for, ever since it did the rounds back on Twitter in February this year, with the challenge now going viral, with everyone from colleagues, friends, kids and schoolmates trying to master the dance. Haven’t heard of it yet? No problem, we’ve got you covered. Here is everything you could ever want to know about the Triangle Challenge. We’ve also included a step-by-step guide as to how you can do it yourself too if you so wish.

How did the triangle dance originate?

As previously mentioned the dance first originated in February 2019, first appearing on the video app TikTOk. A user posted a video of him and three of his mates performing a dance to Kelis’s milkshake, and so the craze began. Receiving thousands upon thousands of view in a short space of time, it was originally known as the ‘Milkshake challenge’.

However, by the middle of March, the dance had spread across social media channels, going completely viral. It was then once it had attracted mass media attention that it gained its new name, the ‘Triangle Challenge’.

How does the triangle dance challenge work?

Want to try it out for yourself? No problem. Here is our step-by-step guide so you master (or at least, attempt to) the dance.

There will need to be three of you to do the challenge. Make sure you stand together in a triangle formation, placing your hands on each other’s shoulders.

To get going, one of you will then jump into the middle of a triangle. The other two will need to jump to either side of the person who is in the middle of it.

After you have done this, move back to the original triangle position.

The next person in the triangle will now repeat the same move, whilst the other two jump to either side of that person

Then revert to the original position, you can sense a theme here…

Last but not least, it is the third person’s turn to jump into the middle, following the same pattern as before

It is finished! Or, you can decide to carry on with the triangle dance challenge for as long as you can possibly handle it before getting too tired and out of breath.