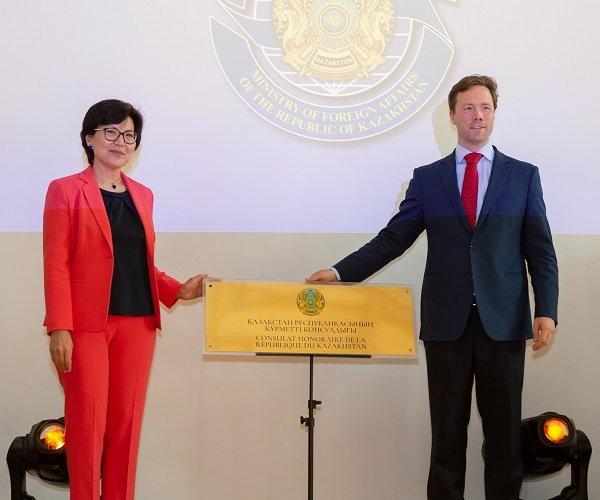 A new Honorary Consulate of Kazakhstan was inaugurated in Luxembourg on the 12th of May 2019, marking the strong relations between the two countries in a special opening ceremony.

Attendees of the 80-person event included the Prime Minister of Luxembourg Xavier Bettel, Ambassador of Kazakhstan to Belgium and Luxembourg Mrs. Aigul Kuspan, and senior representatives of Eurasian Resources Group.

The appointment of Honorary Consul of Kazakhstan in Luxembourg took place earlier in the year, on the 17th of January 2019. ERG’s Chief Executive Officer Benedikt Sobotka was appointed to the role and this appointment was honoured during the inauguration ceremony as he was presented with a set of traditional robes to wear.

Sobotka thanked the audience and spoke of the warm welcome ERG had received when first coming to do business in Luxembourg, as well as of the ongoing strong ties that the two nations had developed. Building bridges, stated the CEO, involves using culture to make connections between people. He then invited all attendees of the event to visit Kazakhstan as part of his commitment to ensuring this connection and making Luxembourg’s people aware of his home country.

One of the key take-home messages from the speech by Xavier Bettel was appreciation for the trust and respect shown by Kazakhstan and by ERG to Luxembourg. Bettel pointed out that acknowledgement and respect of the differences between the two countries, which include the much larger size of Kazakhstan, were equally as important as the similarities of the two nations in terms of forging a lasting relationship.

Dr Alexander Machkevitch, chairman of the board of directors at ERG, also spoke of the thriving relationship his company has held with Luxembourg over the past five years. Machkevitch emphasised the wonderful conditions in Luxembourg to do business and live and thanked the government for its support in helping ERG establish its headquarters there.

Benedikt Sobotka is co-chair of the Global Battery Alliance alongside his roles as Honorary Consul of Kazakhstan in Luxembourg and CEO of Eurasian Resources Group. ERG is one of the co-founders of the Global Battery Alliance and a leading participant in the Belt and Road Initiative in China. Sobotka commented on how bilateral cooperation in business could be increasingly developed through the opening of the new Honorary Consulate.