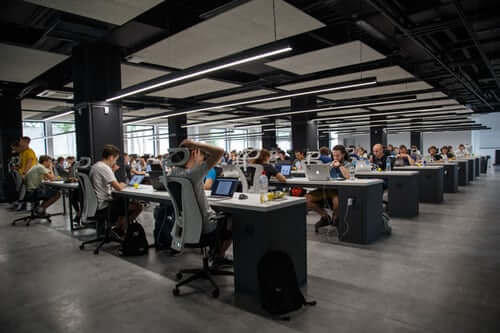 A new study, The Gen Z Effect on Workplaces in the UK, has uncovered the career drivers, views and values of the largest generational population in the world. The research, which focused on both current and future Gen Z employees in the UK, alongside UK business decision makers, found that employers must ditch the Millennial playbook and write an entirely new one for their newest, youngest employees.

Conducted by Nintex, the global standard for process management and automation, the findings revealed a number of key differences between Millennials and Generation Z. Whilst Millennial workers tended to prioritise office environments and team dynamics, Gen Zers are firmly focused on companies’ ethical values such as sustainability and inclusion. For them, company values are second only to salary as the biggest driver behind their selection of their first job. By contrast, while Millennials notably focused on company culture, Gen Zers ranked culture toward the bottom of the list.

Gen Z is also prepared to be loyal – a trait that many employers cited as absent from Millennial workers. According to the new report, they are ready and willing to commit to a single company. But in order to stick around, they need to feel they have opportunities both to grow and to do fulfilling work.

“Generation Z has both the DNA and the inclination to drive next-gen enterprise efficiency,” says Florian Haarhaus, Nintex VP for EMEA. “However, companies must ensure they provide a values-driven environment if they are to attract the next wave of talent coming into the workplace.”

“The rise of Gen Z is an opportunity for companies to foster a committed new class of employees who will help take the business to the next level,” adds Haarhaus. “It’s up to employers to recognise the importance of providing them with an environment that offers them dynamic opportunities to grow, while staying true to its values and ethics.”

Face time, not FaceTime. Nine out of 10 Gen Zers want check-ins with their manager to happen in-person, while a mere 4% want virtual check-ins. Nintex found weekly, in-person check-ins to be the optimal cadence for both employee happiness and productivity.

Loyal. Fifty-six percent of Gen Z surveyed expect to remain at their first job past the one-year mark, with 69% of that group planning to stay past the two-year mark. Only 31% of Gen Zers said they plan to leave at or before the year mark. But, in turn, Gen Z expects prompt promotions: Over half of Gen Z employees (51%) anticipate a promotion within one year of starting their first job.

Personal interest = passion. The overwhelming majority of Gen Z (66%) say they selected their program of study due to personal interest, not because it prepares them for a specific career path (only 27% said this). Regarding their selection of major, Gen Z is again driven by what is personally interesting. Yet even as university students, many are also considering the state of the economy.

The debt factor. Over three-quarters of Gen Zers in the UK graduate from university with student loan debt. Student loan debt plays a decisive role in the decisions Gen Z makes as they prepare to enter the workforce. As Nintex found, student debt pushes Gen Z to stay longer in their first jobs. Compared to their UK peers without university debt, current Gen Z UK employees with debt are much more likely to plan to remain in their first job for less than one year (38% vs. 16%) and to negotiate their salary (48% vs. 40%).

AI awareness = openness. Gen-Zers who say they are extremely familiar with AI/automation in the workplace are much more likely to feel it will make their work easier, as compared to Gen Zers who are only somewhat familiar with AI (62% vs 30%). Companies should position AI and automation as technology partners, not as competitors, and as tools to augment, not replace, people.

The Gen Z Effect on Workplaces in the UK study from Nintex provides ample evidence that the youngest working generation will elevate current and future workplaces if given the opportunity for growth, recognition, and advancement.

According to the report, it will be imperative for decision makers and managers of Gen Z employees to invest in their incremental career growth, cultivate a culture of improvement, and build an empowerment narrative around AI and automation.

Nearly Half of UK Teens Have Fallen for Fake News

Is Your Pancake Batter Than a Robot’s? AI Reveals The Perfect Pancake Recipe