Graphics chipmaker Nvidia is among the world’s leading semiconductor companies best placed to succeed in the gaming arena in the next two to five years, says GlobalData, a leading data and analytics company.

According to GlobalData, gaming is one of the top ten themes that will impact the semiconductor sector, alongside data centres, high performance computing, AI, autonomous vehicles, Industrial Internet, ambient commerce, 5G, M&A and geopolitics.

The video games industry is growing fast. In 2018, the video games market was worth more than $130bn and is likely to become a $300bn-plus industry by 2025, according to GlobalData figures, having grown at a compound annual growth rate (CAGR) of 13% between 2018 and 2025.

“Today’s video games industry is in the throes of a huge transformation from a product-oriented business to an as-a-service model. At the same time, new technologies like 5G, cloud, and virtual reality (VR) will usher in a new phase of innovation, while new business models like support for in-game micropayments are already changing the economics of gaming.” 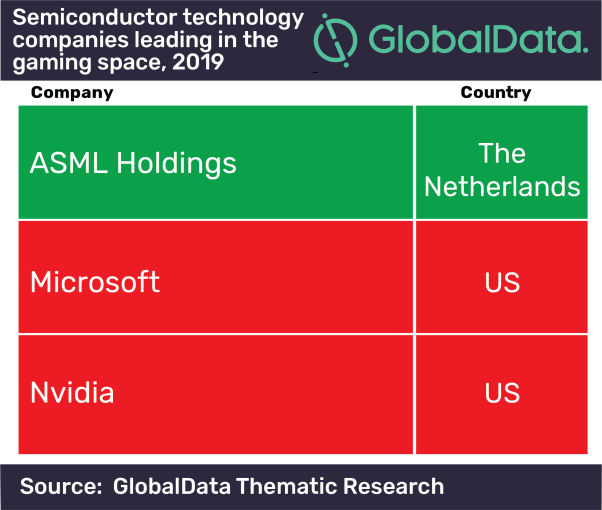 Mewawalla continued, “Companies who invest in the right themes become success stories with those who miss the big themes, ending up either falling behind their competitors or failing altogether.

“Cloud gaming is evolving into a global phenomenon. Major games companies are racing to become the Netflix of games, driven by rapidly increasing viewership on existing streaming channels. However, latency and bandwidth limitations will serve as a brake on the development of mobile gaming services.”

GlobalData’s latest Thematic Research reveals that within 10 years, traditional PC and console gaming will have been largely replaced by games hosted in the cloud and accessed via thin-client PCs, consoles, or mobiles. The gaming on-demand model is picking up based on the success of video streaming and cloud storage, with the sole objective of providing gamers with frictionless and direct playing abilities across multiple devices.

Rapid growth in investment from the likes of Microsoft, Google, Sony, Tencent, Nokia, EA, Nvidia, and Loudplay, among others, are currently stimulating growth of the cloud gaming market.

Mewawalla added, ‘‘History is littered with great companies who disappear because they miss the key themes in their industry. And gaming has become a disruptive theme.

“The video games industry is booming, driven by a combination of trends, including the popularity of relatively new platforms like the Nintendo Switch and advances in technology that has enabled the development of bigger, more immersive games.

“The introduction of reliable high-quality streaming services is likely to be the most important technological theme for video games companies in the coming year. Streaming has already caused major disruption in the music, film and TV industries and it could have just as big an impact on the video games sector.”