Revealed: Over £3 billion in office investment outside London

Despite the economic and political turbulence caused by Brexit – aspects such as the UK’s talented labour pool, strong financial markets, transparent laws/regulations and advanced technology infrastructure – still makes the UK an attractive proposition for businesses/investors seeking to set-up or expand their operations.

Interested in office investment, commercial property specialists SavoyStewart.co.uk analysed the latest findings from several regional city reports complied by Knight Frank, to discover the total ‘investment volume’ and ‘take-up’ of office space in 10 major cities across the UK in 2018.

The 10 cities included within the research are as follows: Aberdeen, Birmingham, Bristol, Cardiff, Edinburgh, Glasgow, Leeds, Manchester, Newcastle and Sheffield. 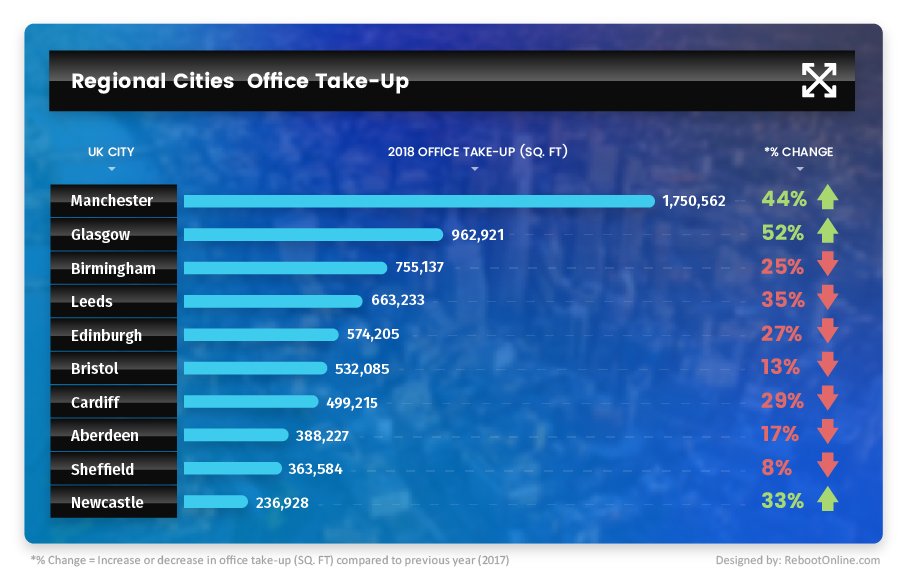 Manchester benefited from the highest office investment volume at £989 million in 2018. This represented an 8% increase from 2017, where the investment figure was £917 million.

Subsequently, Glasgow gained an investment volume of £468 million. This was a 3% rise from 2017, where office investment level was £453 million. 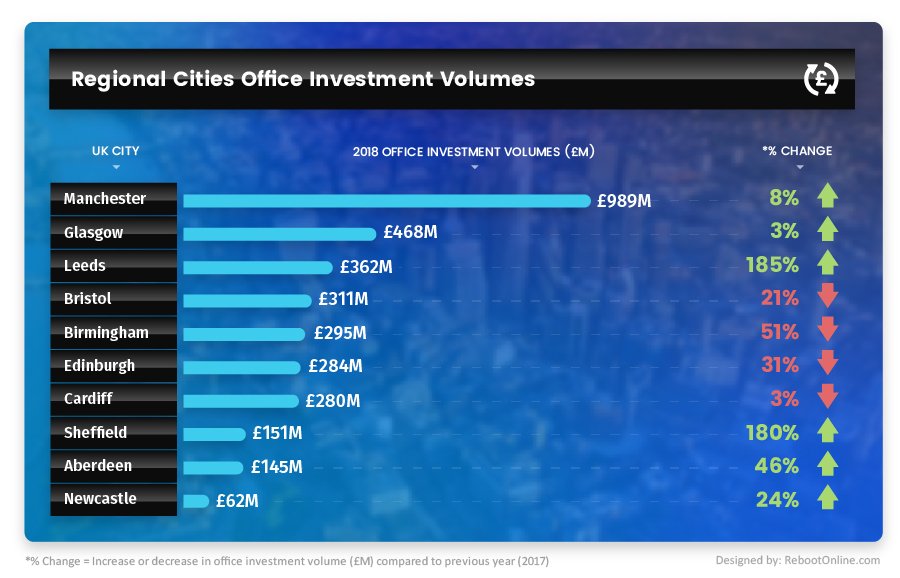 Collectively, £3.347 billion is the staggering sum, when totalling each of the ten cities 2018 office investment volumes together.

Moreover, Savoy Stewart surveyed 436 office-based businesses from a range of industries, who are all looking for new working premises this year – to discover the factors (other than price) they are mainly focusing on in their search criteria. They ranked as follows:

“With the uncertainty of Brexit glooming over the UK, it is not entirely discouraging businesses from searching for and acquiring new office space. On the face of it, take-up and investment volumes in different cities outside of London indicates a strong and promising outlook for the office market. Though some cities scope for office space seems to be more active and resilient to economic pressures than others. Looking ahead, this research also provides a great insight into the primary factor’s businesses are putting high on their agenda when searching for office premises this year. With some surprising outcomes”.