Where Are The UK’s Most Entrepreneurial and High-Earning Regions? 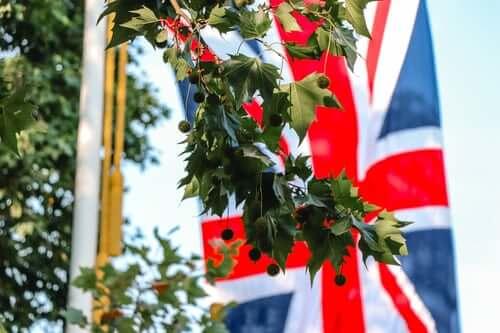 People working in London and the South East tend to be the highest earners, but are they the most entrepreneurial as well? A new study found that it rings true in the South and East, but tables tend to turn in Scotland.

NimbleFins’ ran the figures of which areas in the UK turn out the most small businesses per 10,000 working population, and which the fewest. Unsurprisingly, London came out on top, beating the UK average by 37%. The capital region was followed by the South East and East of England. North East was found to be the least entrepreneurial UK region, with 35% less small businesses per 10k working population than the UK average.

Where Scotland beats many UK regions in median earnings, it loses out on entrepreneurship. The study found Scotland to have one of the lowest numbers of small businesses, 452 per 10k working population, which is 23% below the UK average. On the contrary, Northern Ireland is in the bottom half of UK regions in terms of median wages, but comes out near the top (5th) in entrepreneurship.

The study also discovered that small businesses outside of London and the South East are concentrated into much fewer areas. For example, the East Midlands has two constituencies with high entrepreneurship rates, whereas the South East has 11. This means that entrepreneurship takes place in a few smaller areas within those regions, rather than all around. 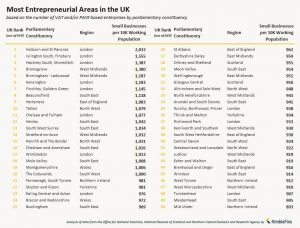 NimbleFins analysed UK business data released on 29 September 2020 by the Office for National Statistics as well as the latest population data from the ONS, National Records of Scotland and the Northern Ireland Statistics and Research Agency. Note: this data does not consider the number of very small businesses that are not registered for VAT or PAYE. Please find the full methodology at the end of the data study.