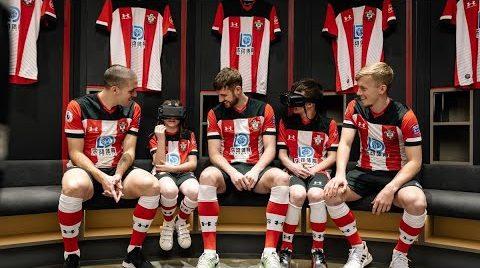 Two young visually-impaired Southampton fans have been given life-changing wearable technology by Virgin Media that will enable them to watch their beloved Saints in a way they’ve never experienced before.

Virgin Media, proud sponsor of Southampton FC, teamed up with the Premier League club and VisionAid to surprise Joshua (14 years old) and Florence (10 years old) with innovative technology at a special experience at St Mary’s Stadium. The pair are both visually impaired, while Florence has tunnel vision, which is the loss of peripheral vision with retention of central vision. This results in a constricted circular tunnel-like field of sight, meaning both have never clearly seen their favourite football club play.

With over 5.1 million visually impaired people in the UK, 43% of whom are football fans, Virgin Media is raising awareness of the technology available and supporting two deserving Saints fans.

Earlier this year, Virgin Media invited the young duo to a special fitting in the home team changing room at St Mary’s Stadium, where they were surprised by Saints first-team players James Ward-Prowse, Jack Stephens and Oriel Romeu.

The players spent time with Joshua and Florence chatting about the season and learning about their conditions, before inviting them to be the mascot and ball carrier at Southampton’s fixture against Manchester City. Despite the fixture being postponed, Virgin Media will honour the invitation and fulfill their dreams when the season gets back up and running. Virgin Media will also be donating their shirt sleeve sponsorship to its charity partner, Scope, for the match.

“It was incredible meeting the players and to be given these glasses which will mean I can now watch the Saints play in a way I’ve never experienced before,” said Joshua.

“I couldn’t believe it when I saw the players for the first time with my new glasses on. To then be told that I would be mascot was just unbelievable – I’m so excited!” said Florence, who also plays in the Saints Foundation Para Football Academy.

The breakthrough IrisVision technology magnifies whatever the wearer looks at through its lightweight headset, whether distant or near, showing clearly the image in front of their eyes on a large screen. In a football environment, watching live matches with IrisVision glasses will enable Joshua and Florence – or whoever uses the technology – to have a less restricted view, meaning they’ll be able to see all of the action on the pitch rather than certain areas.

The technology will not only help them watch their favourite players and beloved team, but in a tricky time of social distancing, the equipment will hugely help both Joshua and Florence with spatial awareness as well as being able to watch television clearly for the first time in their lives with their family.

Jeff Dodds, Chief Operating Officer at Virgin Media said: “We’re hopeful that this technology will be life-changing for both Joshua and Florence, helping them to not only watch television and assist with their learning during this difficult period, but also to watch live football when the Premier League resumes.

“Rewarding the most loyal and passionate Southampton fans is at the heart of our Super Saints campaign. We couldn’t have found two more worthy recipients of this technology and we can’t wait to see them walk out with the Saints players as mascot and matchball carrier once the Premier League season is back underway.”

James Ward-Prowse, Vice Captain of Southampton FC, said: “It was fantastic to meet both Joshua and Florence and be a part in making their day so special as part of Virgin Media’s Super Saints campaign. It’s incredibly rewarding when you’re given the opportunity to help kids who may be having a difficult time and we look forward to welcoming these Super Saints back to St Mary’s when the season kicks off again!”

Ellis Ellis, Managing Director of VisionAid said: “Being a family owned and run business we really care about finding the best possible solution to help each individual, wherever it might come from. It was a pleasure to evaluate Joshua and Florence’s specific requirements and we hope they’ll benefit enormously from this life-changing technology.”