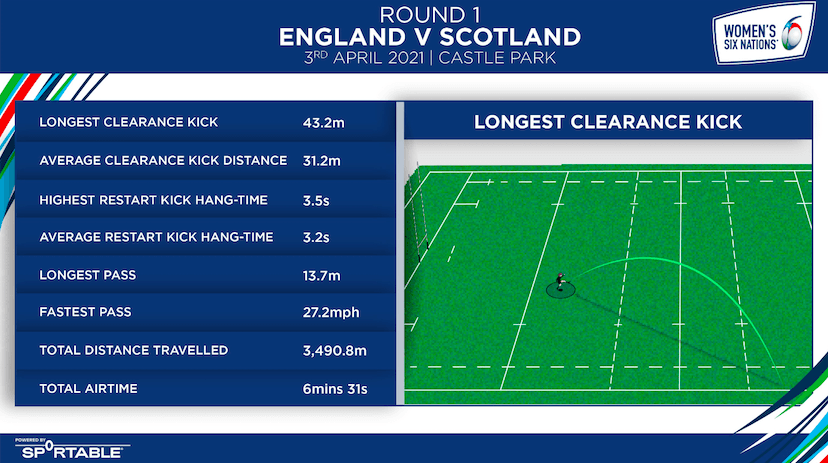 The opening weekend of the Women’s Six Nations Championship saw the introduction of new technology.

In another first for this Championship, Six Nations Rugby are delighted to announce that Smart Ball Technology was trialed for the first time in an international Test match in Doncaster last Saturday.  This new technology was pioneered by the English and Scottish Women during their opening game of the Women’s Six Nations and will be trialed in further matches throughout the 2021 Championship.

The introduction of the Gilbert x Sportable smart ball in the Women’s Six Nations represents a breakthrough in innovation for rugby.  It is the first elite, international tournament to use the Ball. Each match ball is embedded with a tiny tracking chip, which captures every movement on the pitch in real-time. The new technology will provide a completely new perspective on player skill and decision making by providing key analysis on the speed of passes, hang-time of box kicks, restarts and distances of kicks.  The aim of this additional insight is to provide coaches and players with an empirical tool to track and develop individual technical skill sets.

Metrics from the ball are collected via sensors around pitch that collate these statistics.  These are then presented privately to teams as part of their post-match review.  In further phases, fans will be able to watch matches with onscreen graphics showcasing match data provided by the smart ball technology.

Ben Morel, CEO of Six Nations Rugby was excited by this new development.

“Despite all the challenges of 2021 we’ve been delighted to introduce a series of firsts for this Women’s Six Nations Championship.”

“We are constantly looking to break boundaries, take rugby to a new level and to introduce innovative tools which we believe will enhance the development of the game as a whole and allow players and coaches to dial into intricate analysis”, he said.

Dugald Macdonald, CEO of Sportable, said: “It is fantastic to announce this innovation in the Women’s Six Nations Championship as it represents a big step forward in our goal to transform the way rugby is seen for both the fans and teams. Over the past 6 years we, and our partners Gilbert Rugby, have developed technology that will transform the way people engage with sport. We are excited to see what the future holds for rugby and this prestigious competition.”

Global Wireless Solutions: What 5G Will Mean for Innovative Startups and Small Businesses