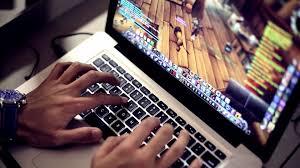 Online gaming has a rich and varied history and has made giant strides since the ‘official’ creation of the Internet on January 1st, 1983. From online console gaming on next generation systems such as Sony’s Playstation 4 and Microsoft’s Xbox One, to MMO and role playing browser-based games, there’s something for everyone and one of the strengths of online gaming lies in the variety it offers.
As the graphics and gameplay of online games have gradually improved over the years, so too has the technology which the games can be played on. In addition to this, there are plenty of new and exciting developments which will only further serve to enrich the gaming experience for gamers of all persuasions.

Granted, the development of VR consoles is still a work in process, but VR Headsets such as the Facebook-owned Oculus Rift are currently granting gamers fully immersive gaming experiences which are at the forefront of cutting-edge technology.
Despite being released back in 2003, Second Life still remains one of the most popular online VR games and requires users to build virtual properties as well as engaging in other community based activities. It’s also possible to make a video game into a virtual reality experience through the use of VR glasses, with popular combat game Unreal Tournament perhaps the best-known exponent of this method.

Whilst platforms such as Youtube Live and Twitch have led to an increase in the number of people watching live gaming, it’s now possible to participate in online games which provide the user with a more realistic experience by making use of 360-degree webcams and microphones.
Online casino gaming is currently at the forefront of this technology, with Live Casino UK at William Hill giving the punter a chance to play with a real dealer as opposed to a computer-generated croupier, thus replicating the thrilling atmosphere associated with actually being sat at the game table.

With the introduction of gaming apps and an increase in the abundance of mobile devices, the requirement to stay stationary whilst enjoying your favourite online titles is a thing of the past.
Online favourites such as Candy Crush and Angry Birds are amongst the most downloaded apps on both the Apple Store and Google Play store, suggesting that gamers are really getting on board with the convenience associated with mobile gaming and if you need further proof, take a mental note of the amount of people fiddling around on their phones on your commute to work – if this fiddling is followed by a few expletives and frustrated groans then chances are, they’re mobile gaming.

The Future Is Bright For Online Gaming

Despite the fact that it feels like the Internet has been around forever, the technology is still arguably in its infancy and so it follows that online gaming is in the same boat. There’s truly no telling what’s around the corner but one thing’s for sure, the next decade or so will be an exciting time if you’re a gamer.