Never Mind The Buzzwords: What Does ‘Femtech’ Really Mean? 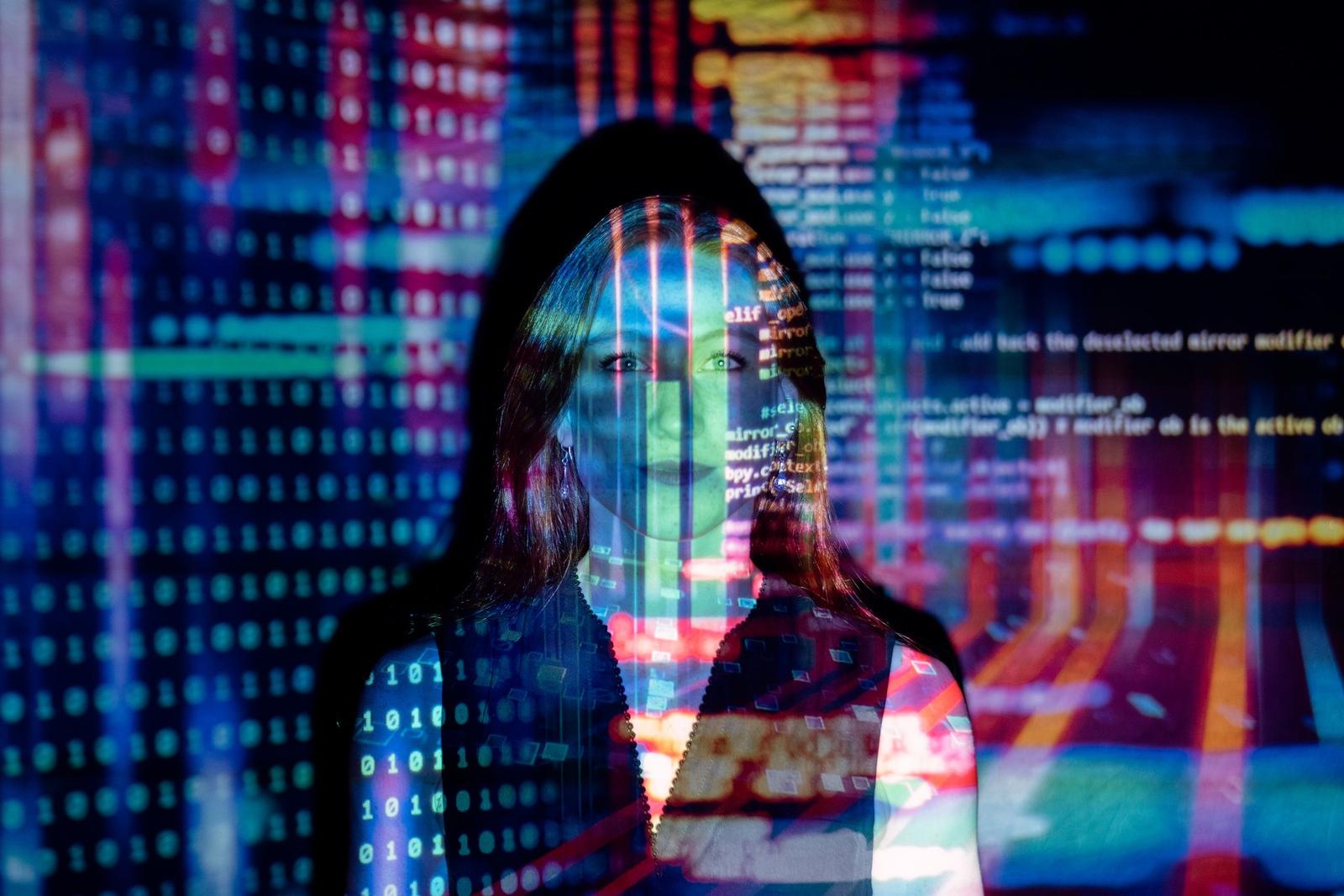 For decades the female health sector has been allowed to fall by the wayside, in no small part due to the male dominance of healthcare as a whole. But in recent years, the situation has started to look distinctly brighter. The evolution of social platforms has helped to stimulate conversations revolving around health-related questions and issues, particularly in the female health space.

Social media is at the heart of driving global conversation, and has become the space to watch when taking a snapshot of the ongoing female health conversation. The high volume and intensity of this conversation, particularly on the female health theme, has attracted both innovators and entrepreneurs, who have started to concoct solutions to the issues being raised.

And so ‘femtech’ is born.

Femtech is an emerging but complex trend in healthcare and tech, where entrepreneurs are trying to address the unmet needs of women’s health. These female health technology solutions have been met with success: Flo, the fertility focused period-tracking app, was valued earlier this year at $800M. It has also been the most popular period tracking app online, generating the most conversations from August to October 2021 according to Pulsar data. 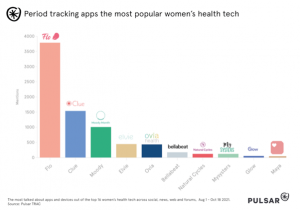 But this new solution is bringing old problems to the fore. So what do people looking to improve women’s health through tech need to understand?

Why femtech is a red herring

‘Femtech’ is a phrase coined by Ida Tin, the CEO and founder of period-tracking app Clue, to better describe the emergent sector. Clearly, the trend is on the rise, crossing over into common usage sometime in 2020. However, if this sector is going to really take off, there must be active engagement between those that produce the solutions, and the people it is designed for.

We found that ‘femtech’ is a term used regularly by male investors and tech professionals, as opposed to women using it conversationally. Clearly, female health and innovations around this are popular topics of growing importance for public debate – but the buzzword ‘femtech’ doesn’t mean as much outside of investor circles.

When we took a step back from ‘femtech’ and looked at conversations where health and technology interacted, a clearer picture emerged. Women have taken to social media to express their, often frustrated, feelings about their health and dealing with healthcare.

The term that came back most often on social media was ‘ignored’ at 41%, with ‘misdiagnosed’ garnering 11% of the share of voice. ‘Kept waiting’ also features at 10%. While the positive term ‘understood’ did feature in online discussions, it only gained just under 25% of the share of voice. If just one in four women reported feeling ‘understood’ in healthcare then there’s a clear health failing. 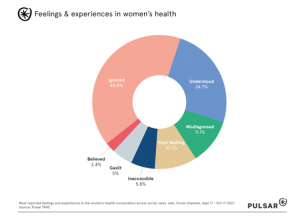 Periods, once a ‘private’ conversation, have made their way into the mainstream on social, and the topic over-indexed both in general conversations around women’s health, and in tech-focused conversations. Once we realised the popularity of this term within women’s health, we looked at both general menstruation health conversations and ones around dedicated apps that made a significant social impact on behaviours and perspectives.

We found that ‘tech’ in periods generally meant apps, which women attributed as positive influences in their lives. They index alongside words like ‘simplify’ (22%) and ‘control’ (19%). Particular emphasis fell on Flo, Clue and period-tracking apps more generally. 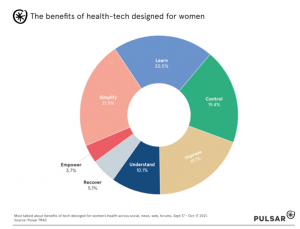 In discussions just around periods, ‘PMS’ was the biggest theme, as women discussed the issues that come alongside menstruation – with ‘hormones’ following at 21%. Clearly, this audience is ready for open discussion around how they are impacted by periods and those in the space should consider this interest when working on female health solutions.

Menopause, on the other hand, is far less associated with technology. This would appear to constitute an opportunity for new solutions within female-facing tech, given that menopause is the topic most commonly linked to feelings of misdiagnosis and ‘gaslighting’ in our analysis. Within the period-app conversation, apps are perceived to aid with community and education, both of which would be invaluable in supporting women through this stage in their life.

By 2025, it is forecast that the femtech industry is going to reach a valuation of $50bn. Considering this will be within a decade of the term first being coined, this is remarkable – and also massively overdue.

With technology in the healthcare sector going from strength to strength, consumers have better access to care than ever before. Help is no longer limited to a hospital. Whether the term ‘femtech’ continues to live on, or is replaced by another word, is irrelevant against the wider context. What truly matters is that female health technology remains fit for purpose, a reality which can only be realised by tech firms listening to day-to-day conversations of the people whose opinions matter most: the tech’s users.

Are We Losing Our Faith in Technology?

Do The Liberal Democrats Have a Digital Manifesto?