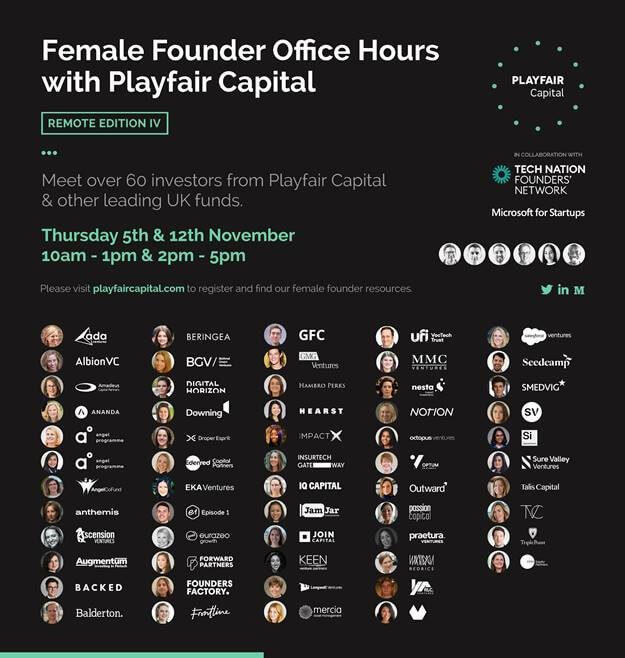 On Thursday 5th and 12th November, 2020, Playfair Capital and 70 of the UKs’ leading venture capital funds, including Seedcamp, Balderton, Notion and Passion Capital, will be holding remote office hours. Female founders, from anywhere in the UK, will have the opportunity to meet four investors during one hour of remote office hours to discuss their tech business idea, ask for advice, pitch for investment and find a mentor.

The event is being held jointly by Playfair Capital and Tech Nation as part of an ongoing commitment to hold three events a year specifically for female founders. The previous three editions saw a total of 1,200 individual mentoring meetings with 290 founders and 85 investors taking part. To date, multiple companies have also received funding, including Organise, SideQuest and Paid.

“I’m absolutely thrilled to see our fourth female founder office hours event come together with the support of Tech Nation. Whilst our first events addressed the challenge of access, removing the need for warm introductions, we are more focused than ever on ensuring that this initiative leads to meaningful relationships and more pounds being invested in women led businesses. With every investor committing to mentor at least one founder from the event and some early examples of cheques being written into companies that attended previous editions, these ambitions are starting to be realised. We’re excited about meeting all the founders in November and making a genuinely positive impact in our ecosystem.”

“We are delighted to again be partnering with Playfair Capital to launch the fourth installment of Female Founder Office Hours. Following on from the success of the events in June, we are keen to ensure that the support our attendees receive continues post Office Hours, and are thrilled that participating VCs will mentor at least one attendee post event. Building on from the last event, Tech Nation’s focus, as a national organisation, will be promoting this great initiative to all female founders, including those that are based outside of London, who may not have been aware of previous sessions or were unable to attend due to location.

The beauty of an online event is that it ensures that all female founders from across the UK will have the opportunity to participate in this initiative and we look forward to working with the amazing female led businesses from across the UK.”

To extend the impact beyond the UK, Playfair has also been making its playbook available to any other fund who wants to hold events for underrepresented founders. To date, female founder focused events have been held in the US with Anthemis, Diversity VC and Ladies Who Launch and Southeast Asia with Cocoon Capital. In addition, Access All for BAME founders will be held on 30 September with Floww, Force Over Mass and Wayra UK.