Services went down for the social media giants at around 16:00 GMT, and stayed that way until around 22:00 on Monday 4th October 2021. Users flooded to rivals Twitter to find out what was happening, as well as air their frustrations.

After announcing the news that ‘some people are having trouble accessing’ their apps and products on Twitter, several rival tech companies poked fun at the predicament. Replies came in thick and fast from companies such as Microsoft TEAMs, Reddit, Xbox and The Sims. There’s a whole host of witty replies to Twitter’s indirect response of ‘hello literally everyone’ from tech companies, celebrities, and gaming sites. 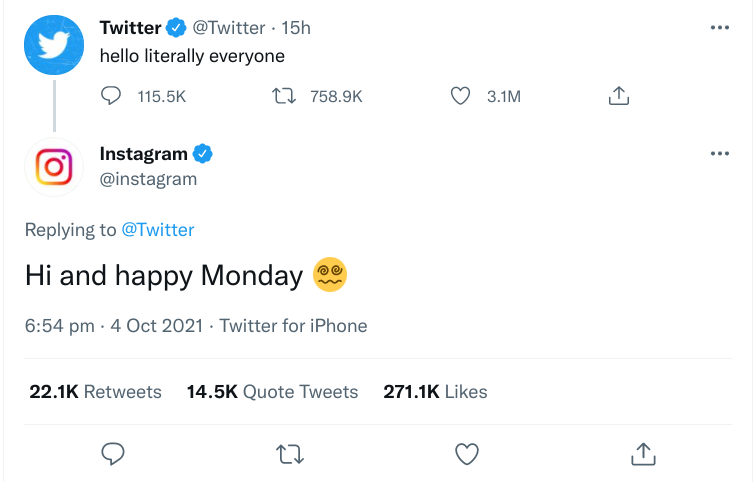 All three apps involved in the outage – Facebook, Instagram, and WhatsApp – are owned by Facebook. Speculation about the cause was large during the actual outage, and many people raised some real concerns about what this could mean for users’ data.

Facebook confirmed in a statement that they believe that their users’ data was safe:

‘We want to make clear at this time we believe the root cause of this outage was a faulty configuration change. We also have no evidence that user data was compromised as a result of this downtime.’

According to Downdetector, some 10.6 million problem reports were received around the world regarding the outage. As disruptive as this is, the number of people impacted is much higher, with many people not sending problem reports. In fact, more than 3.5 billion people use Facebook (including Facebook Messenger), Instagram, and WhatsApp.

Many people were quick to highlight that this is not the first time an outage of this scale has left Facebook apps and products inaccessible: a 2019 outage lasted almost 14 hours.

“Even the smallest change can have detrimental consequences to a network and business and is a stark reminder of the importance of implementing and following set change management, deployment and testing processes. Following every outage, the main questions that a business must ask themselves is what was the root cause, and how do we make sure that never happens again?”

What Was the Impact of the Outage on Businesses?

Many businesses rely on the power of social media to fuel their engagement and sales. With three of the biggest social media platforms offline for 6 hours, many businesses will feel the impact of what is merely an inconvenience to those who use the platforms for personal socialising.

This concern was echoed by Tom Cox, Digital Marketing Manager at Friel, who stated that the outages will “put into question how Facebook will remunerate (if possible) those who were spending on ad campaigns throughout the outage”. After all, if you’re spending on an advertisement campaign, you want people to actually be able to see your advertisements.

Daniella Genas, Growth Strategy Specialist and Innovation Expert at business support company She’s the Boss, emphasised how these channels should be used as a tool for businesses to gain engagement, not the full strategy:

“Social media is great for building awareness and connecting with prospects and customers/clients, however, the strategy should always be to move prospects/clients/customers into a mailing list and/or software/applications that reduce the reliance on any one platform.”

Many other businesses shared Daniella’s views: Fiona Scott, who runs her own media consultancy in Swindon, emphasised “don’t put your eggs in one social media basket … while it’s great to have huge success and a large audience on a single platform, you always have to bear in mind it can disappear for a reason outside of your control.”

The Impact on Small Businesses

Many small businesses use Facebook’s apps and products to propel their business to as many people as possible. Instagram and Facebook Marketplace have become the home of the small local business, and WhatsApp is a great facilitator of conversation between customer and seller.

David Clare, Head of PR at Fox Agency, shared his sympathies for how small businesses will be impacted by the outage:

“Personally, I feel more for the smaller business owners who use Facebook and their other services to sell through. Facebook has become much more powerful than a dedicated website for many small businesses, and being small, they feel the impact more.”

Lucy Jeffrey, Founder of Bare Kind, told us: “I am worried how heavily reliant I am on Facebook as a platform, my sales were 1/4 of what they normally are”. This is likely the sad reality for many small businesses and startups who don’t have the resources to expand to several platforms.

It’s easy to say that businesses should operate and advertise on more than one platform, but what about content creators who have to rely on social media sites such as Instagram for exposure?

“Whilst the Instagram and Facebook outage might have given social media managers a much-needed break, it was a bit of a shock for content creators who rely on the platform to distribute their videos and engage with their communities of fans. Often content creators plan ahead and, normally – if they’re good – have a schedule of what content is going where and when.”

What Can Businesses Learn From The Outages?

With the sheer amount of problem reports that were received, there’s no doubt that Facebook, Instagram & WhatsApp’s outages impacted many people. However, a lot of these people relied on these platforms not only for communication, but also for business.

“Last night’s outage served as a stark reminder for all brands and businesses that replying on just one or two platforms or media to ensure effective customer outreach and engagement, is a risky approach to take.”

The main take-away for businesses from yesterday’s chaos should be to diversify their business strategies to include several social media platforms, as well as mailing lists and their own websites. Don’t put all of your eggs in the Facebook basket!