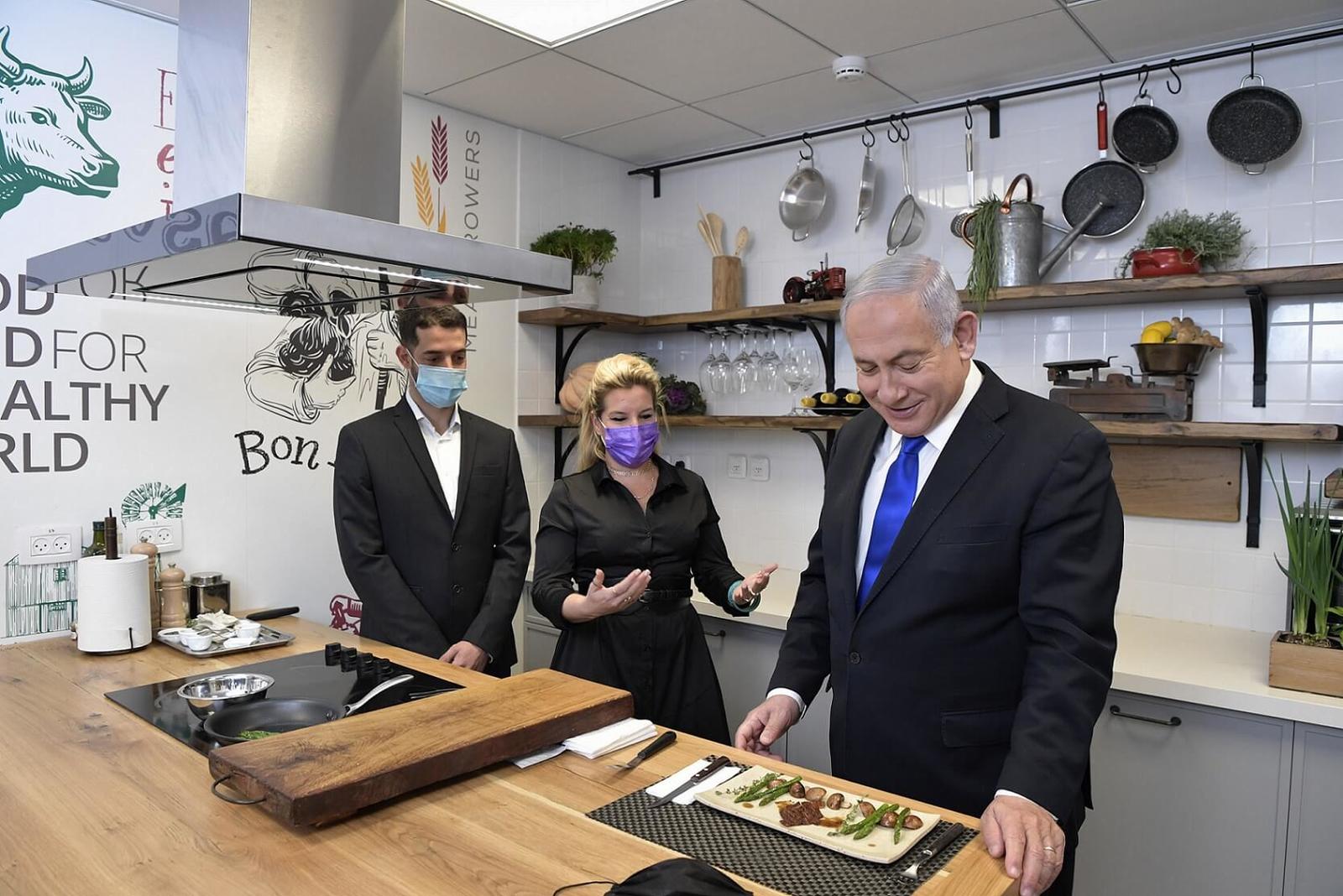 As part of a national policy plan to establish Israel as an alternative protein leader, Prime Minister Benjamin Netanyahu is the first head of state to taste meat cultivated outside of a cow.

Positioning the nation at the forefront of a global alternative protein ecosystem, Israel’s Prime Minister visited Aleph Farms, a cultivated meat company and tried out its cultivated steak. The company is a pioneer in growing real meat directly from cow cells under controlled conditions, using a fraction of the resources required for raising an entire animal for meat and without antibiotics. During a global “space race” to sustainably produce and supply high-quality meat and secure a stable food channel to the growing population, this move is set to place alternative protein as a key lever of growth for Israel.

During the visit, the Prime Minister tasted Aleph’s cultivated steak along with The Good Food Institute Israel’s Managing Director Nir Goldstein. Prior to the tasting meal, the Prime Minister accompanied by the government’s animal rights advisor, Tal Gilboa, toured the facilities, receiving an overview on the production process and about the company’s distinct sustainability vision. The visit also included a presentation by Goldstein and Aleph Farms’ Co-Founder and CEO Didier Toubia, who shared the organisation’s National Policy Plan – detailed roadmap for making Israel the global alternative protein leader.

“It’s delicious and guilt-free, I can’t taste the difference,” declares Benjamin Netanyahu, Prime Minister of Israel. “I have directed the State Secretary Tzahi Braverman to appoint a body to serve these industries in order to connect and oversee all the stakeholders operating in this field. Israel will become a powerhouse for alternative meat and alternative protein.”

Israel has become a uniquely fertile ground for innovation in FoodTech, with tight connections having been forged between academia, food industry, and the government. In a move to propel food innovation, the Israeli Innovation Authority established the FoodTech incubators ‘The Kitchen Hub’ and ‘Fresh Start’. Aleph Farms was founded and nurtured by The Kitchen Hub incubator of the Strauss Group, in collaboration with Prof. Shulamit Levenberg, Dean of the Biomedical Engineering faculty of the Technion – Israel Institute of Technology.

Last week, Singapore made headway to concluding the world’s first regulatory process that will bring cultivated meat to the market. This has transformed the cultivated meat movement from being a long-term vision into becoming a realised practical solution that addresses some of the world’s most pressing challenges of our times. Aleph Farms, SuperMeat, MeatTech and Future Meat Technologies are some of the world’s leading cultivated meat companies and all are headquartered in Israel. Aleph Farms has been the first to cultivate a steak outside of a cow’s body and to pledge to become carbon-neutral by 2025 and initiated a pilot cultivation facility earlier this year. SuperMeat and Future Meat Technologies have debuted the first cultivated meat restaurant and manufacturing plant respectively.

COVID-19 and climate change have served to point out the sensitive nature of food systems and highlighted the urgency for establishing sustainable and resilient food systems. Like many other countries, Israel is facing food security challenges, having 85 percent of the locally consumed beef in fact imported, and not locally produced.

“The new national plan for alternative proteins involves six different ministries and capitalises on Israel’s unique capabilities…” says Didier Toubia, Co-Founder and CEO of Aleph Farms. “Aleph Farms is a great example of such collaboration between a governmental agency, the industry, and the academy – all working together to secure a leading position in this key industry. The goal of implementing such national programs for food security is to provide unconditional and secure supplies of quality nutrition to anyone, anytime, anywhere,” ”We feel lucky to be part of the local cultivated meat industry, which is working collaboratively to stimulate a global transition for the protein sector,” adds Toubia.

“Alternative protein production could prove to be a central economic growth engine for Israel…” explains Nir Goldstein, Managing Director of The Good Food Institute Israel. “With governmental support in this industry, we could enjoy 11,000 additional jobs that would earn the economy billions of dollars each year. Israel which currently exports only 5% of the food it produces, could become a global supplier of raw materials and advanced production technologies for alternative proteins. This can all become a reality, in part thanks to the governmental support thus far, but it also depends on government funding from here on of scientific research and development to turbo-charge alternative protein innovation,” concludes Goldstein.

“The Israeli government has turned the country into a nerve centre for plant-based and cultivated meat innovation,” enthuses Bruce Friedrich, Executive Director of The Good Food Institute. “Israel is creating a welcoming ecosystem for alternative protein innovation, and the Prime Minister being the first head of state to eat cultivated meat exemplifies this support and underlines the nation’s commitment to the future of meat.”