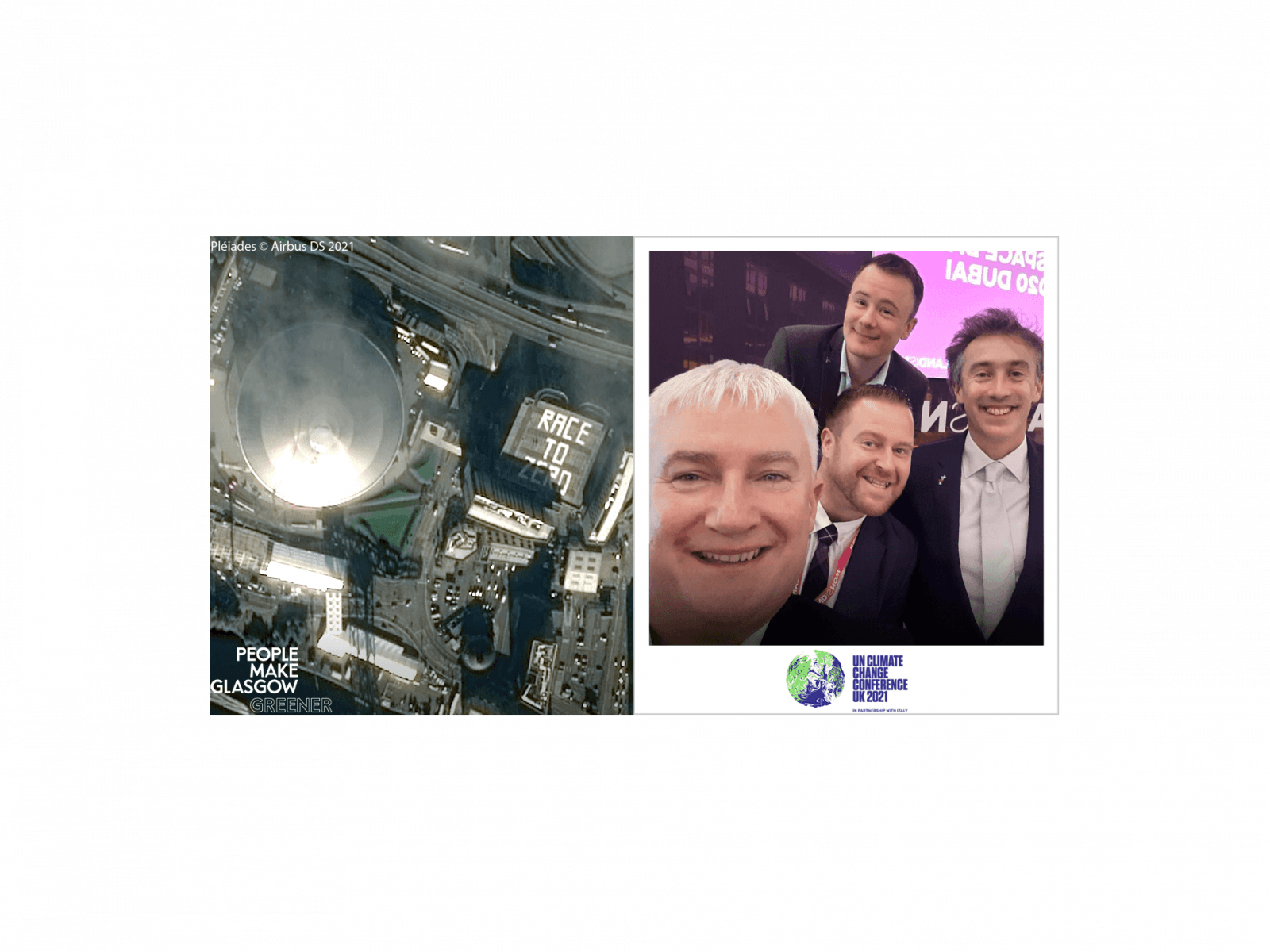 Scottish spacetech company Spelfie, which captures satellite images of music festivals, sporting and large cultural events and their attendees from space, has revealed its latest image with a poignant global climate change message.

The striking image taken in Glasgow, in partnership with AIRBUS and powered by Peddlesmart, which will be launching its zero-emissions Flexiquad bikes in 2022, reveals ‘RACE TO ZERO’ displayed next to the Glasgow’s OVO Hydro, the venue and sponsor of The 26th UN Climate Change Conference (COP26).

In the ‘space selfie’ supporting the message are Chris Newlands, CEO of Spelfie; Daniel Smith of the Scottish Space Leadership Council; Kevin Scullion of Scottish Development International and factual TV presenter Dallas Campbell of BBC and National Geographic. They were all in Dubai this week during Expo2020’s Space Week in Dubai, alongside other selected organisations from the Scottish Space sector.

“The Race To Zero needs to be front and centre in people’s minds as global leaders come to Glasgow for COP26 and the striking satellite image captured by Spelfie, just footsteps away from where they will meet, is fitting and powerful.

“Glasgow is a city of ideas and innovation, and I was delighted to support both Spelfie and Peddlesmart in taking that message from our city to the world and into space,” commented Cllr. Macdonald.

Race To Zero is a global campaign to rally leadership and support from businesses, cities, regions, investors for a healthy, resilient, zero carbon recovery that prevents future threats, creates decent jobs, and unlocks inclusive, sustainable growth. It mobilizes a coalition of leading net zero initiatives, representing 733 cities, 31 regions, 3,067 businesses, 173 of the biggest investors, and 622 Higher Education Institutions. These ‘real economy’ actors join 120 countries in the largest ever alliance committed to achieving net zero carbon emissions by 2050 at the latest.

“It’s exciting to have the opportunity to contribute to the Race to Zero efforts through our zero-carbon alternative to cars and vans. The Spelfie campaign helps us to promote COP26, Net Zero Strategy and the scheduled Zero Emission Vehicle Mandate. PeddleSmart’s FlexiQuad range is now available for trials with production starting within 2022 and I hope to work with our partners to make a difference here in Scotland,” said Adam Reid, CEO of Peddlesmart.

Spelfie’s CEO, Chris Newlands, will be speaking at the alternative COP26 event COPtimism on 28 October explaining the role that tech and particularly spacetech can help in the fight against climate change and global warming.

“Technology and in particular spacetech is moving at a pace that we have not seen since the 1960s space race and I see it as my role to educate and also to learn how we can all work together on a global scale to reap the all the benefits space and satellite technology can help society and humanity in the future,” he said.

Spelfie secured a vital US Patent earlier this year.

“Spelfie is currently focussing on offering unique Space to Consumer (S2C) Engagement Strategies. Having been granted a US Patent in March 2021, this is enabling the company to offer our current and future partners new and exciting S2C strategies, which will underpin an entirely new technology sector. Through satellite imagery, the relationship between humanity and satellites offers exciting societal, climate and commercial opportunities which we and our partners, such as Peddlesmart, are currently exploring.

“Race To Zero needs to be highlighted to the world. Therefore, I was struck by the resulting satellite image which Spelfie has captured. It is a memorable visual metaphor with a shadow hanging over the Race To Zero. It could not have been more fitting, particularly ahead of global leaders coming to Glasgow for COP26 in the days ahead,” Newlands added.

Newlands attended Expo2020 as part of a small cohort of elite spacetech companies invited by the Scottish Government and will also be delivering a keynote speech on 21 March 2022 as a VIP speaker as part of the ‘How will we Advance?’ Breakthrough Moment on the UK Pavilion in Dubai and states how delighted he is to be working closely with Scottish Government and the DIT.

Spelfie will allow the everyone to show their support for the RACE TO ZERO message and react to the announcements as they arise. The COP26 event will be launched on 1 November, 2021 in the Spelfie app, available in the usual app stores.