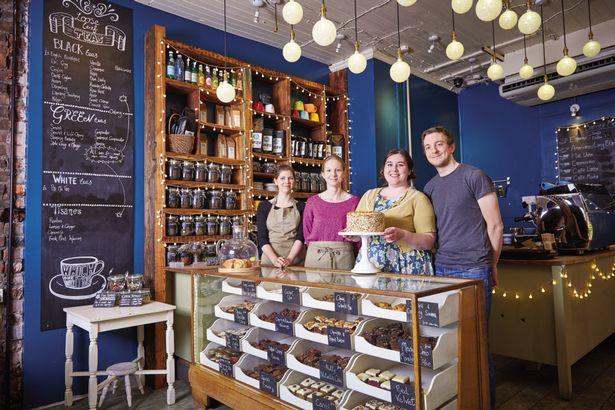 With Newcastle’s independent café scene thriving, we decided to find out how the city’s most popular coffee and cake house Cake Stories started this exciting business venture.

What was the inspiration behind Cake Stories?

“Cake Stories began as a part-time cake business that me and my Mam ran two days a week, but actually it turned into an excuse to open up a coffee shop which is what we’d always wanted. So, me and my husband Ben always wanted a coffee shop during the day that turned into a wine bar at night. We wanted to make somewhere nice to go that’s not a restaurant, not a pub, not a club – somewhere really chilled to go in the evening, and a hub for the community to come together during the day as well. My Mam had always wanted a café as well, when we started Cake Stories it was just the cakes, but we soon realised that was our way into opening up a coffee shop. So we’ve always said right from the beginning that the cake is the excuse and actually what we really wanted was to host an environment where people just felt great about themselves, where people are treated with respect. We wanted Cake Stories to become a space for people to connect and share their lives together. It’s just hospitality essentially, it’s just about making people feel well-hosted, making people feel comfortable, like they’re in a home from home.”

How has Cake Stories grown in the last 4 years?

“As a business we’ve changed a lot. When we first opened up we had shorter hours than we have now, and it felt really busy because we were run off of our feet. We didn’t really know what we were doing, and we were learning everything as we went, but when we look back now on how we’re doing financially, how we’re doing in terms of numbers of people through the door everyday, it’s multiplied by 5 or 6 times compared to when we first opened. So just looking at the plain numbers its grown hugely, but then also our staff team is bigger, our capacity is bigger, we can take on bigger projects, we’re not phased by things that used to terrify us, our productivity, how many plates we can spin all at once, that’s all grown as well. Whilst we’re still in the same building as we were in when opening, it’s busier, it’s faster but it’s also stronger with those things as well. We’re more successful in what we do compared to when we first started.”

Have you always been into speciality coffee scene?

“I’ve always been a coffee drinker, since I was 13 I’d drink coffee to go to school. So I always called myself a coffee drinker, but it wasn’t until me and my Mam were prepping for opening up Cake Stories that we went for some training to understand coffee better, and that was when the world of coffee just exploded for us. So I was always into the idea of coffee, and I was always into the chats that you have over coffee, but in terms of speciality coffee I had no clue at all until I started working in it.”

What makes Cake Stories stand out from other independent cafes?

“The most obvious thing is our focus on cake, we do a lot of cake, (we do really good cake!), I guess a lot of our focus is on that. But if you look at our reviews, whilst people do talk about the cake, a lot of the other themes that come through are the feeling of the place, the atmosphere in the room – this isn’t unique amongst independent coffee shops, because I think independence get this much more right then high-street chains. But people talk about the heart, the soul, the peace they feel in the room, the warm welcome, people talk about the atmosphere feeling welcoming and cosy, like a home from home. I think that’s really cool about independent coffee shops, its people with a vision to make people want to be in this room. If you think about it, it’s just four walls on another street, it’s just a particular box in a town, but for some reason people are drawn to it because they feel good there. That’s what people talk about when they talk about Cake Stories. I think the atmosphere is fairly unique to other coffee shops, but in terms of other independent coffee shops then I guess it’s the whole package really; it’s the cake, it’s the quirky decorations, it’s the personality that comes across in the business. That welcome is top of the list really.”

What are some of the main challenges you’ve faced whilst starting up a business?

“When we first started out, the main challenge was that we didn’t have a clue what we were doing. We knew what we wanted to do, and that was about it, we didn’t have any idea really how to do it. I think we’ve always had a fairly good gut instinct for what we thought would make it work, and I think we’ve been very lucky, and we’ve had a few lucky breaks along the way. We had to go looking for help and guidance in how to set up a coffee shop, and it’s the things that no one tells you. You can write a list of questions that you need answers to but you have no idea with the questions you’ve not thought about yet because you’re not experienced enough in that field.”

18 months in it nearly crashed out – financially we nearly went bust. This was mainly because we buried our heads in the sand, and we weren’t doing the finances well enough, we weren’t tight enough on the finances, and we’d got to the point where we’d used up all of our contingency, and we were running out of time to turn that around. We caught it literally just in time, by the skin of our teeth. We made some massive changes; we changed the menu, we changed the staffing, we changed the pricing, we did some things that were really scary that felt like make or break, and thank goodness it worked out. But through that we learnt a lot of massive lessons, and we won’t make the same mistakes again now.”

“The main challenges were working out how to find out what we needed to do, and we were just really practical about that, we read a couple of amazing books, we went on a course which was really good and lead us to the people who have now become our long-term coffee suppliers. Then to be honest we just got on with it, just applied the principal that we were happy to make mistakes as long as we learnt from those mistakes. The second big challenge was the finances of things, and we just had to learn some skills and take responsibility for knowing the numbers inside out, and we had to get brave with fixing that, made some bold decisions and then stick to them. We just worked solidly to make sure that it worked. Thankfully it worked out, and we’re on the right side of things now.”

What does the future hold for Cake Stories?

“A lot of ideas and dreams – I wouldn’t say that any of those are fixed plans yet, because we’re very much fans of have a direction that you’re heading in but try not to miss out on the great opportunities that present themselves along the way. I’m really happy for our plans to change as we move forward. I’m really happy to see an opportunity come up that we never could’ve thought up ourselves and decide to go for it. I guess in general terms, basically, we want to take over the world with cake! We want to be a household name for cake. We had this little side mission which we’ve not been very loud about yet, where we want to help get rid of the boundaries between dietary requirements. We want to come up with a way that breaks the stigma around, for example, a vegan diet, and make things accessible to people with all different needs dietary-wise.”

“We’ve had to work really hard at that because when we started out none of us were vegans, none of us had a gluten free diet, and we just baked cakes that we thought were great, and we didn’t really think about catering for those things. Then step by step, we really wanted to be inclusive, we wanted these people to know that they’re important too, that’s what runs down to the core of our values. But along with that we’ve refused to let standards and quality slip, which is really tough because everyone thinks gluten free cakes are dry, everyone thinks vegan cakes are just sticky banana, and so we’ve aimed to move beyond that and provide someone with a cake that is just the best chocolate cake they’ve ever tasted that also happens to be vegan. We just want to help break down those preconceptions, and make it okay for people to have specific diets but also reduce our society’s reliance on animal products, because long-term it’s just not sustainable.”

“So while we don’t run a vegan cafe, we’re trying really hard to reduce our impact on the environment, and take people with us along the way, help people to realise it’s not one extreme or the other. It’s a bit of a dream for us to have a brand that’s synonymous with total inclusivity, and really good values in terms of environmental issues. Along the way, we’d love to have a few more coffee shops in the region, we think it’s a great place to be as a customer but we also think it’s a great place to work as a member of staff. We’ve seen people come in who have been fairly low in confidence, and we’ve seen them go out much higher in confidence, along with some extra skills that they can apply to whatever job and career they pursue. We recognise that we have something really good, and we’d like to replicate that in a few different parts of the region. Hopefully we can use those businesses to bring in people who maybe would struggle to get a job somewhere else, and give them a great training ground to gain those life skills.”

“So we’ve got a few things that we’d love for the future, but we don’t have a five year plan, we’re just taking it a month at a time and considering options as we go really.”

Digi.me: Unlocking the Power of Personal Data to Fuel Innovation and Transform Lives