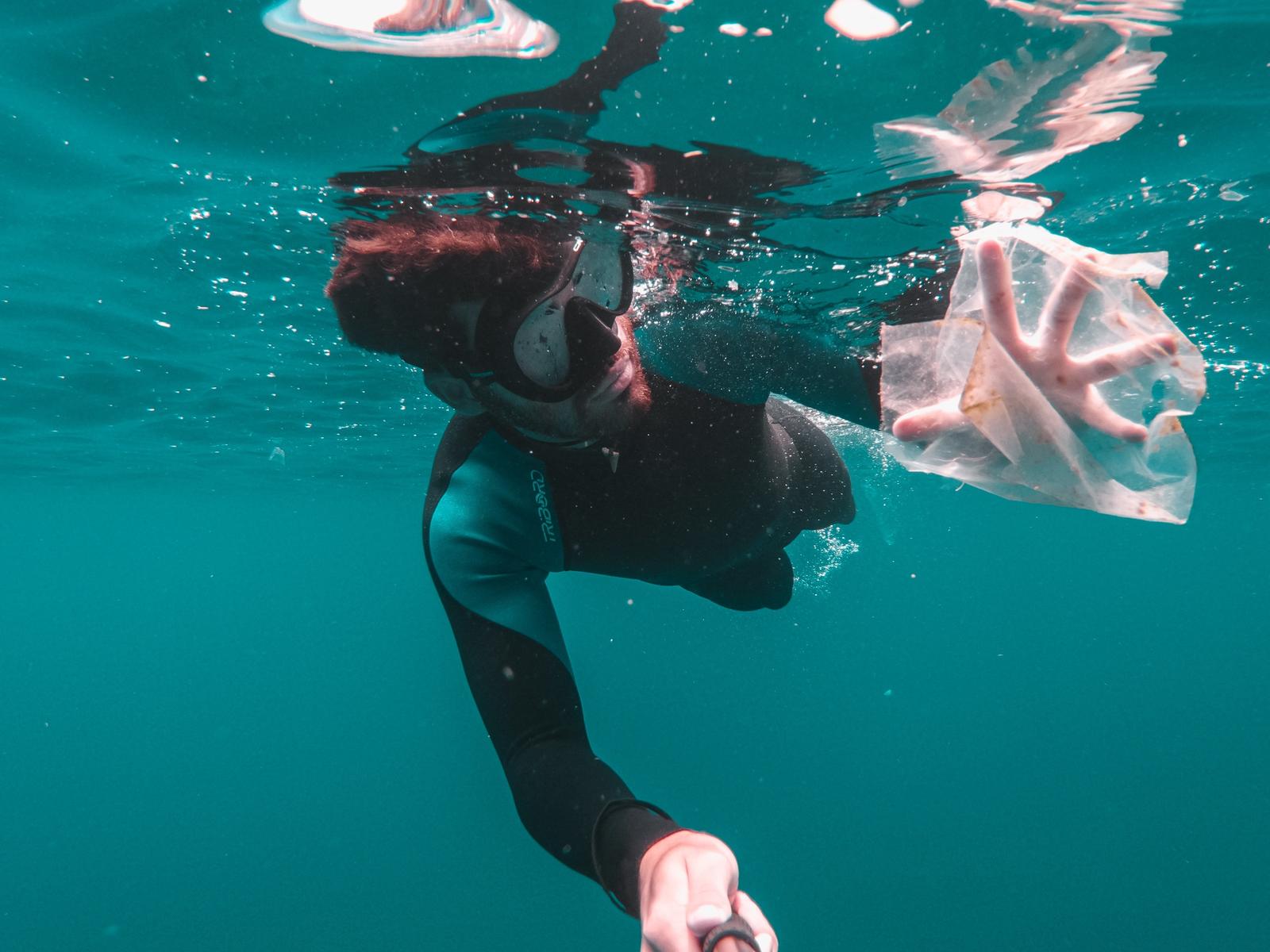 Plastic alternatives are big business. As the world becomes more aware of the effects of plastic on our environment, wildlife and health, there’s a huge demand for materials that do the same job with a lighter footprint.

Plastic-free businesses have seen a boom over the last few years, and consumers around the world are calling for change. In March, the EU approved a ban on a range of single-use plastics including plastic cutlery, cotton buds, straws, drink stirrers and balloon sticks.

The British government introduced a carrier bag levy in 2015, and supermarkets report an 85% drop in usage since. Today, the pressure is on to ditch plastic packaging altogether.

What’s the problem with plastic?

A 2017 study by Dr Roland Geyer from University of California in Santa Barbara, and colleagues, calculated the total volume of all plastic ever produced at 8.3 billion tonnes. Of this, 6.3 billion tonnes—that’s a little over 75%—became plastic waste, with 79% of that going to landfill.

Plastic was never intended as a disposable material. The first man-made plastic was Parkesine, a type of celluloid created by Alexander Parkes of Birmingham in 1853. Parkes hoped that his material would replace ivory, but ultimately abandoned his work due to scale-up costs. It wasn’t until the 1950s that single-use plastic became ubiquitous.

The issue with plastic is that it never biodegrades; it just breaks down into microscopic pieces and makes its way into bodies of water, where it is ingested by animals and humans alike. Even recyclable plastic isn’t as sustainable as it seems: once melted down, most is such poor quality that it has to be mixed with new plastic to create new materials.

The biggest problems facing sustainable packaging today are the same as ever: scalability and affordability. As companies scale up production and sales it’s likely that their products will become as affordable as their plastic counterparts.

More and more companies are experimenting with natural materials to create plastic alternatives. Today we’ll take a look at five businesses that are leading the charge against plastic.

CuanTec takes inedible waste from Scottish fisheries and extracts chitin, a natural biopolymer that can be used to make plastic alternatives. Chitin is naturally tough and a major component of crustacean shells and fish scales; when processed into chitosan its antimicrobial properties make it popular in medicine, agriculture and winemaking.

Chitin extraction and processing is usually heavily polluting, but CuanTec has developed an energy efficient fermentation process that produces a purer product, along with a protein-based byproduct that can be used as salmon feed. The startup then mixes its chitosan with other natural biopolymers and substances to create a flexible, antimicrobial, compostable bioplastic film.

While chitosan has as many as 3,000 industry uses, it’s particularly interesting for food packaging. As a compostable material, it could tackle the millions of tonnes of plastic that end up in the sea every year; on top of that, its antimicrobial properties help to keep food fresh and reduce waste. CuanTec says that its packaging extends the shelf life of fresh salmon by up to three days compared to conventional plastic.

Last October, John Lewis Partnership selected CuanTec as one of JLAB’s four startups tackling plastic waste. The group, which includes British supermarket Waitrose, has committed to making all of its own-brand packaging widely recycled, reusable or home compostable by 2025—so it’s entirely possible that chitosan-based packaging will start to appear in shops in the next few years.

Founded in 2008, Ecologic claims that its packaging has diverted 350 tonnes of plastic from landfills over the last ten years. The company’s flagship product, the Eco.Bottle, is made up of a strong, moisture-resistant, 100% paper shell fitted around a thin, recyclable plastic liner that collapses with use, ensuring minimal product wastage. It’s home-compostable and suits a range of products, from wine to pet food.

The downside is that Ecologic’s products still involve plastic—just significantly less of it. While the inner film is recyclable, it cannot be recycled at kerbside and must be processed with plastic shopping bags at specialist facilities.

Last year, L’Oréal partnered with Ecologic for its subsidiary brand Seed Phytonutrients. The bath and beauty range comes in bottles made with waste from L’Oréal facilities and is fully recyclable. A mineral-based coating makes the bottles shower-friendly, although it’s not yet clear whether the end product is still compostable.

Loliware burst onto the scene in 2015 with fully edible plastic alternative cups that reportedly taste like fruit rollups. Initially developed for a Jell-O competition, the Loliware cup is plant-based, naturally flavoured and sturdy enough to drink from before being eaten or composted. Made with agar, a vegan gelatine alternative from seaweed, the cups become tougher when used for cold drinks but dissolve in seconds under hot water.

The idea proved so popular that the startup made $110,000 in sales within three months of launching. Companies and consumers alike clamoured for a taste of the product, with demand outstripping supply.

Loliware then appeared on Shark Tank and grabbed the attention of the sharks, resulting in a $600,000 investment between Barbara Corcoran and Mark Cuban in exchange for 25% equity.

In recent years, the startup has set its focus on drinking straws. The Lolistraw still uses agar seaweed as its base, but is sugar-free. It can also withstand over 18 hours of continuous use, making it a great alternative to short-lived paper straws. Drinks company Pernod Ricard, which owns Perrier-Jouët, Absolut and Kahlúa, and hotel chain Marriott have both signed on as customers.

Skipping Rocks made waves in 2017 when it crowdfunded £850,000 for Ooho, a plastic alternative that reimagined water bottles as edible bubbles. Now named Notpla, the startup has developed plastic-free sauce sachets and water- and grease-proofed takeaway containers using its seaweed-based material.

While there’s still work to be done on shelf-stability—Notpla’s film lasts just six weeks before it starts to degrade—businesses are keen to get on board. Just Eat ran a six-week trial in one of its partner restaurants last summer, and the London Marathon replaced plastic bottles with Notpla capsules this year.

Another potential avenue for Notpla is hospitality. Many hotels are ditching mini toiletries in a bid to reduce plastic waste, but the startup’s single use sachets could prove a worthy alternative.

Last year, Sky invested an undisclosed amount in Notpla through its Ocean Ventures initiative. The startup has also received funding from the European Union.

Tipa draws its inspiration from nature’s packaging: fruit and vegetable peel. The startup’s aim is to produce plastic alternatives that are fully compostable and leave no residue.

Tipa’s focus is on flexible packaging for produce, coffee and snacks. Most flexible plastic is not recyclable as it is a blend of different materials that are difficult to separate. That hasn’t hurt demand: research suggests that flexible plastic packaging will be worth a little under $180 billion USD by 2025.

Tipa’s bio-based packaging composts in six months in an industrial composter. It boasts all of the key properties for flexible packaging, including transparency, sealing strength and shelf life, although it is not yet heat-safe or suitable for liquids. Luxury womenswear designer Gabriela Hearst was first to replace all of her brand’s packaging with Tipa packaging, and the Israeli company’s customers include Snact, Mara Hoffman and The Happy Pear.