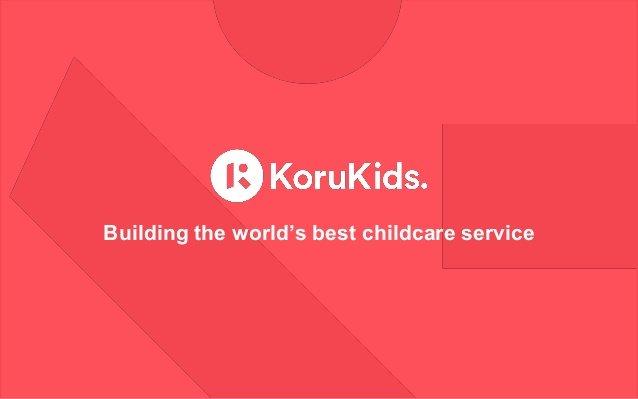 Rachel Carrell founded Koru Kids in 2016. The New Zealand-native has a doctorate from Oxford and previously worked at McKinsey. After having her first child, she realised how expensive and challenging childcare options where in London. Carrell saw many of her friends experiencing the same problems. Some gave up work or made unwanted career choices based on the difficulty in finding childcare. She committed to changing this, quitting her job and setting up Koru Kids in 2016. The company launched with £600,000 in seed funding, with co-founder of Gumtree Michael Pennington among the initial investors.

Rachel Carrell described her aims saying “I set up Koru Kids to be all about three things: really great childcare, as affordable as possible, and as convenient as possible.”

Koru Kids specialises in after-school care for children aged between four and ten. The platform connects parents with vetted local nannies who can work the hours needed after school at a set rate of £13 an hour. Koru Kids stands out from other nanny agencies as it takes a commission per hour, rather than the hefty upfront fees typically charged.

Koru Kids holds its nannies to high standards, hiring only 10% of applicants. Uniquely, the company trains the nannies themselves. Each nanny undergoes training which includes first aid, educational philosophies, homework, risk assessment and safety in the home. Koru Kids places focus on its older nannies, mostly over 40, who have gained confidence and experience.

With the platform, parents don’t need to hire a full-time nanny or au pair, which can be incredibly expensive, but rather can book childcare day-to-day, as and when they need it. The platform covers all factors of nanny hire, including taxes, payroll, pension, holiday, nanny communications, activity ideas and more. Koru Kids describes themselves as tech-led, using unique software which allows them to be as efficient as possible for working parents.

The ‘family finder’ tool allows local families to nanny share. This benefits both the parents, who pay less per child, and the nannies who earn more for their time. Over 100 families are already using the nanny sharing tool.

The success of Koru Kids

The childcare startup is fast-growing, having more than doubled its staff since December 2018 and quickly outgrown its original workplace. Now more than 1,000 Koru Kids nannies pick up children from schools in London every day. Rachel recently won the ‘Best Business Woman in Technology’ award at the Best Business Women awards for her work setting up Koru Kids.

‘No-one quite believes we’re a hard-nosed value-driven business, until they see the results’ interview with ethical advertising platform, The Good-Loop