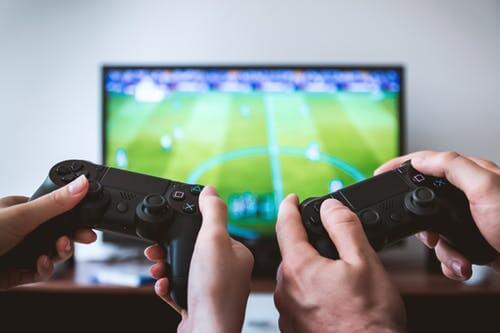 In the modern world of video gaming, there is no longer one set way of playing. While many still enjoy single play through a PC or console, different niches such as eSports have begun to make their presence felt. It is perhaps the way that players can game against each other that has changed the most though. In days gone by, this meant everyone being in the same room to play on the same machine while staring at the same monitor. This was great if you had the space, and your friends all lived close by and could get over when you were free. But what if this wasn’t the case?

Luckily, the ever-advancing technology behind video gaming provided the perfect solution to this problem. Making use of wireless tech and advances in global internet connection routes, online gaming meant that you could play with your friends without all being in the same room. You don’t even have to be in the same country nowadays. This was not only limited to playing games online with friends either and the extra social aspect that this tech brought to gaming allowed you to interact with new players you met online also.

As playing socially online in this way began to take off, so did peer-to-peer gaming in its wake. In simple terms, this sees players engage directly with each other online to play games. This can be against each other as well as playing on the same team. It is the ability to battle it out against other human players that has made it really popular though. After all, next-gen computer AI is cool, but you cannot beat the thrill of outwitting another person in real-time online! Popular online games such as World of Warcraft or For Honor can be played in this way.

Of course, it is not only peer-to-peer gaming where technology has had a real impact lately. Online gambling is a great example of another industry that has made the most of recent leaps forward in data encryption processes, faster load speeds and more stable hosting. Many online casinos now will even let you play with games using cryptocurrencies. If you want to get the best from some of the the most innovative and amazing slot games – play with Bitcoins.

How Does the Tech Behind Peer-to-Peer Games Work?

There are actually a few ways that you can use technology to play peer-to-peer games. The more traditional method sees a dedicated central server used by players to access the game. Players would connect to the dedicated server itself rather than each other, and no one player controls this server.

Another way of playing peer-to-peer sees players connect with each other directly and not through any dedicated central server. This usually sees one player who initially set up that particular gaming network become the host server as well as a player. Their computer will then send packets out over the internet to other players to enable the game to function online. Setting up a peer-to-peer online network will also usually involve port forwarding to enable players to join in. The big bonus with this method is that you only play with a group of people you know and like, rather than it being open to the public as a dedicated server set-up is.

Although the above way of setting up a group of friends to play with online usually sees one person’s computer act as the server, sometimes a different method is used. This is known as “meshing” and sees no actual dedicated server in action over the group. Instead, every player who joins runs the necessary background logic and commands on their own computer. As all are directly connected, they can then play together online still.

For running your own group outside of the main dedicated central server, the final tech piece of the puzzle is known as “game services”. This relates to servers that are needed to deliver non-gameplay-related things. This could be matchmaking between computers or sharing IP addresses between players so that they can connect.

In essence, peer-to-peer gaming is all about getting together with other people online to enjoy playing video games. As the above shows though, the technology behind it is actually quite clever with a few ways to go about it. Whether you decide to simply log on through a central dedicated server or set up your own network instead, it is a great way to meet new people and make the most of your spare time.

How website design has changed in the last 20 years

How Does Online Sports Betting Work?

5 Reasons Why Your E-Commerce Site Has Slow Load Time