Using Google data, Our friends at Betway Casino have revealed the board games that different countries have been searching most as they pass the time during their now extended time at home with house and flat mates and friends and family, as never before. People have, unsurprisingly, been looking for ways to pass a lot more time than they have ever had, or expected to have over the last month or two. Technology, like Zoom amongst others has helped people stay in touch and remain connected. Interestingly, there has also been a huge rise in the popularity of good old-fashioned board games according to Betway.

According to data from Google Trends, the term ‘board game’ was searched more often on Google in March 2020 than in any other month since records began way back in 2004, excluding the occasional run-up to Christmas, when present-buying, board games, nostalgia and what to do with potentially very distant relatives is a pressing concern for many. That aforementioned spike in search volume in March is almost double what it was in February, before most countries went into lockdown.

Which Traditional Board Game’s Popularity Has Increased The Most? 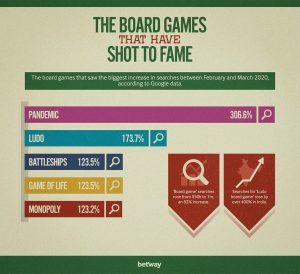 Ironically, the board game Pandemic, which requires players to eliminate diseases that have broken out in different parts of the world, has experienced the biggest surge in popularity in recent months. Google Keyword Planner reveals that the term ‘Pandemic board game’ received more than 245,000 global searches via Google in March, more than double the number of searches made for ‘Risk board game,’ which came in at second with 90,000 searches. The only time that Pandemic (the board game) has received even a third of that amount of searches was in 2009, during the Swine Flu pandemic.

Which Board Games Are The Most Popular? 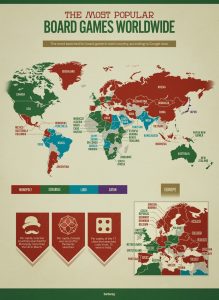 While Pandemic has experienced the biggest spike in global searches via Google, it is those traditional, popular old favourites such as Scrabble, Monopoly and Ludo that remain the most popular board games throughout lockdown, emphasising the power of nostalgia in times of desperation and upheaval. Google Trends data reveals that Scrabble is the most searched-for game online, and is particularly popular in French-speaking countries. Per capita, French-speaking islands Martinique and Reunion searched it the most, followed by France, Senegal and Canada.

‘Francophone Scrabble’ is the popular French alternative of the game, and likely accounts for those results.

In the last 14 years of the French Scrabble Championships, there have been seven different nationalities of winner, which have included Senegalese, Congolese and Ivorian nationals, so its appeal is far and wide. Monopoly, a favourite across Asia and Europe for many decades and across so many families, came in at second in terms of its global popularity, which is unsurprising considering the game has been reproduced in 103 countries in 37 different languages.

There are modernised versions, pop culture versions, football club versions and several others, which means that it the family favourite of Monopoly is highly unlikely to ever grow old or go stale amongst families.

The board game Ludo was the third-most popular of the three leading board games worldwide according to Google data. Ludo originates from Pachisi, an Indian game which has its origins in the sixth century. It therefore makes sense that, per capita, 16 of the 17 cities that searched for Ludo online are in Asia, including 15 in India. According to Google Keyword Planner, searches for ‘Ludo board game’ rose from 1,300 to 6,600 in India from February to March, a rise of more than 400 per cent during the course of the COVID-19 lockdown.

Which Countries Have Searched For Board Games Most Often?

Given the most popular board games in March were invented by English speakers, it should come as little surprise that they are most popular in English-speaking nations. According to Google Trends data, the UK, Canada, Australia and many other smaller English-speaking regions were all among the top 10 searchers of ‘board game’ in March, per capita. No country however, has dominated the search numbers as the USA has done. The USA alone accounted for more than 50 per cent of total worldwide searches for ‘Pandemic board game’ in March and were responsible for over 40 per cent of searches globally for ‘board game’. 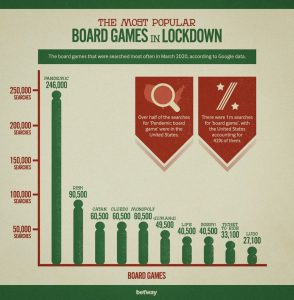 This all therefore explains why, according to Google’s Keyword Planner, board games such as Life and Sorry! were both amongst the 10 most widely-searched, despite the fact that they are rarely played elsewhere. Life, commonly known and marketed as The Game of Life, simulates a person’s life, from childhood through to adulthood, featuring school, college, marriage and retirement. It saw 78.7% of its 40,500 searches in March come solely from the USA.

Sorry! was first published in the UK in 1929, but quickly rose to prominence across the Atlantic, with the US accounting for 61.3 per cent of its 40,500 searches in March.

How Do Board Games Compare to Other Forms of Entertainment?

Board games are proving so popular during lockdown that, in certain countries, more people are searching for them on Google than for Xbox or PS4 games. When combining Google searches for Scrabble and the FIFA video game series on Trends in March, the board game received 80 per cent of them in Canada and 79 per cent of them in France and USA. No matter how popular the likes of Fifa, Call of Duty and other video games prove year after year, data does suggest that human emotion and our relation to nostalgia is just too strong for the likes of Microsoft, Sony, EA Sports and others to overtake.

It was a similar story with Ludo in certain parts of Asia.

Sixty-eight per cent of the combined Google searches for Ludo and FIFA in March were for the board game in India, with 59 per cent of them going the same way in Pakistan. As restrictions ease around the world, it’s probable that the surge in popularity for board games will slow. But it’s clear that in difficult times, people all around the world have found comfort in the charms of these traditional forms of entertainment.