Protectivity has conducted research that reveals which countries are attracting the most gym businesses and which companies are leading the way in funding and trademarks. Incredibly, industry research shows:

Sports business insurance provider Protectivity has analysed data from hundreds of innovative gyms to reveal which countries are home to the highest number of gym businesses, which gyms have the highest funding and which brands are most protected by registered trademarks.

Over the last few years the rise of social media platforms such as Instagram has led to a huge shift in both the way we exercise and how we view fitness. Instant sharing now means that we see constant reminders to be active, when the importance of leading a healthy and active lifestyle could have previously been easily ignored. As a result, the fitness industry is booming, with endless opportunities for new businesses to emerge.

The Rise of Gym Startups

In the UK alone, the number of fitness memberships held has now soared past 10 million, and with the average gym membership costing around £35 in 2018, a demand for alternative or lower-cost options has opened up new opportunities for businesses in the industry. As a result, since 1990 there has been a huge global rise in the number of startup gym companies each pursuing their gap in the market, with an increase of over 400% in the last 30 years.

A clear peak can also be seen in 2015, with over 60 gyms founded this year including Pivot and Lefit who have both also seen huge investments. However, reports suggest that the gym bubble may have burst with individuals transitioning to at-home workouts or outdoor exercise using wearable technology rather than heading to a physical gym space.

Which Countries Have the Most Gym Companies?

Perhaps unsurprisingly, the United States is currently home to the most gym companies, with 189 HQs within the country. However, the United Kingdom, Germany and Spain all sit within the top eight countries based on number of gym companies, highlighting the strength of the European fitness market which is currently home to 62.2 million fitness club members and over 61,000 clubs according to an industry report by Deloitte.

Despite being one of the most technologically advanced countries in the world, Japan sits much further down the list, with just one major gym company. However, the nation’s ageing population has resulted in a more complicated industry, with companies looking for ways to engage younger more budget-focused individuals who are seeking more active gyms, as opposed to the full-service clubs favoured by the over 60s. 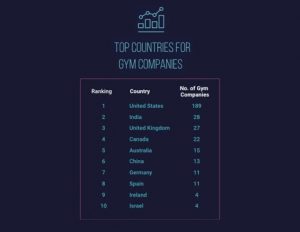 Which Gym Companies Receive the Most Funding?

When it comes to the gym industry, funding is big business with the combined total of the gym companies used in our analysis sitting at over £1.2 billion ($1.6 billion). Of these companies, gym class subscription-service ClassPass is the clear leader with around £420 million ($549 million)  in funding, putting it a huge $249 million (£190 million) ahead of Gympass, the company with the second highest level of funding.

The Gym and Pure Gym also make the list, with the two companies leading the way in the UK. The low-cost gym brands operate over 200 clubs a piece, making them the biggest gym brands in the country, and are partly responsible for a 4.7% gym membership increase nationally, following a large expansion drive. 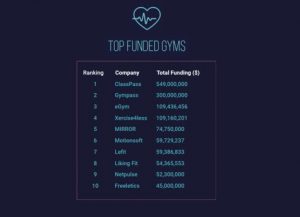 In an increasingly saturated market, such as the fitness industry, the value of a well-known brand is undeniable. As a result of the high levels of competition, many companies go to great lengths in order to protect their name and image.

When looking at the number of registered trademarks held by companies within the industry, Gold’s Gym is at the top of the pack, holding 74 trademarks. Given that the brand shot to fame after being featured in the 1977 film “Pumping Iron” with Arnold Schwarzenegger and has been at the heart of California’s Muscle Beach bodybuilding scene since opening, it’s hardly surprising that this level of brand protection has been put in place.

“It’s clear to see there has been a shift towards more people taking an interest in fitness and leading a healthy lifestyle, which is clearly reflected in the number of fitness startups over the last few years.”

“It’s great to see that the UK has a strong place within the global market and some leading fitness brands. Businesses like this are key to the economy due to the number of employment opportunities they provide for both in-house members of staff and self-employed fitness freelancers”.