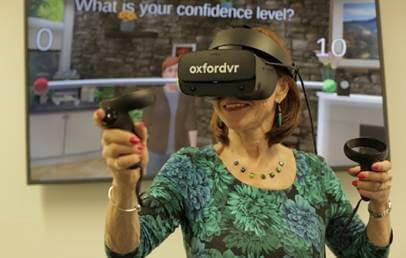 Anxious social withdrawal is one of the most debilitating aspects of mental illness and is a major unmet need in mental healthcare. It is common in multiple mental health conditions such as agoraphobia, panic disorder, social anxiety, depression, personality disorders, substance abuse disorders, and schizophrenia.

Founded in 2017, Oxford VR’s work is at the frontiers of exciting innovation in mental healthcare using powerful virtual reality technology and evidence-based science to improve capacity and outcomes. The company creates automated VR therapy interventions that build on 20 years of clinical research by Daniel Freeman, Professor of Clinical Psychology at the Department of Psychiatry, Oxford University.

Individuals experience intense feelings of fear and panic particularly when alone in everyday places or situations they regard as ‘unsafe’ and consequently they withdraw. This could be using public transport, being in a supermarket or just going outside their door.

Over time their world can shrink as they withdraw to avoid the trigger situations. For some, it can progress to a point of social isolation and affect their overall health in a way that is comparable to the impact of obesity and cigarette smoking. Developed by OVR clinicians and a team of programmers, designers, artists & animators, OVR social engagement™ is a user-centred program that translates evidence-based cognitive-behavioural therapy (CBT) through immersive virtual reality environments.

OVR social engagement™ is delivered over half-hour weekly sessions. During a session, the user puts on a VR headset and enters a virtual world where they are guided by a virtual coach and required to complete a series of graded tasks, in different environments such as a street scene, a bus, and a shop – reflecting everyday triggers.  Great care has been made to ensure the environments are life-like, interactive, and engaging.

Throughout the program the user gradually faces problematic situations to feel safer, more confident and more in control. The VR environments give people the reassurance they can try out new things safely.

By completing the tasks, the user learns how to cope in these situations and the evidence confirms that the behavioural changes made in the VR environments transfer to the real world. The program is automated and does not require a qualified clinician and can be delivered by a trained member of staff.