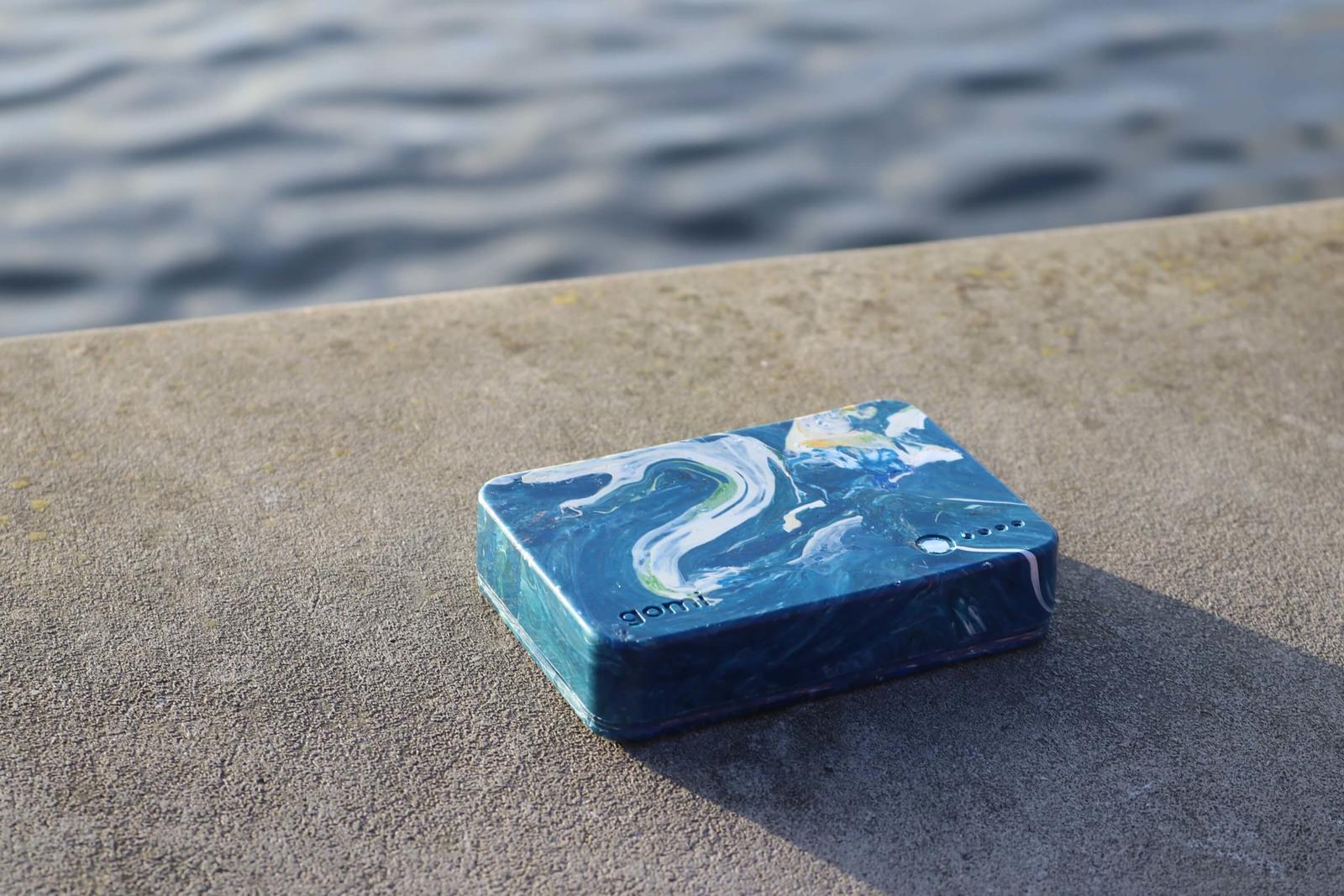 Gomi is a sustainable design studio in Brighton, England, that turns non-recyclable plastic waste into tech products. Their first creation was an infinitely recyclable Bluetooth speaker made of waste plastic bags. The startup aims to prevent plastic waste from going to landfill, being incinerated or polluting the ocean.

Gomi was co-founded by sustainable designer and maker Tom Meades. It gained international recognition in January 2018, after winning £10,000 from the Environment Now Programme to launch and produce the Gomi Speaker, with additional funding from the Santander Big Ideas Competition of June 2018. The brand, characterised by bright marbled motifs, is inspired by Japanese minimal design. The word “gomi” comes, as it happens, from the Japanese language, and it means waste. The studio turns non-recyclable plastic waste into tech products like speakers and portable chargers.

Every year, the world produces 150 billion kilos of flexible plastics, which are all not accepted by UK authorities for recycling. The types of plastic Gomi saves and works with to create its products are three: flexible PE, which includes plastic bags, bubble-wrap, pallet wrap and cling film, PP, such as yoghurt pots and clear disposable cups, and PS, like plastic cutlery and food boxes. The waste, which then becomes Gomi’s primary feedstock, comes from food wholesalers in Sussex, as well as local businesses and households.

After receiving the plastic waste from food wholesalers, local businesses and residents, Gomi melts it inside its ovens to form a kneadable paste. The molten “plastic dough” is then worked and kneaded until it looks like coloured marble: Gomi’s distinctive style. The team then heats up the compression moulds for the chosen product (speakers or chargers) and fills them with the molten marbled plastic. The moulds are closed and pressed together in a machine, and the excess dough coming out of the moulds is cut away and recycled. This material is, as a matter of fact, infinitely recyclable for designer products.

Once the moulds are cool, and the plastic on the inside has solidified, the team at Gomi opens them and finishes the parts by hand. In the final manufacturing stage, all the electronic components of the product are inserted and the device is assembled. In order to make a Gomi speaker, the studio recycles the equivalent of 100 plastic bags.

On 31st March 2020, Gomi launched its latest product: a limited-edition high-powered 12,000mAh portable charger. The sustainable product is hand-made out of non-recyclable plastic waste and powered by repurposed waste batteries. This latest creation aims to tackle two waste streams. The first one being flexible plastic trash, or LDPE, which is used to form the charger’s shell, like in Gomi’s other inventions. And the second one being battery waste.

Gomi decided to tap into this second waste-related issue after realising that, currently, more than 3 billion batteries are produced worldwide every year, without no real way to upcycle them in other commercial products. With the global demand for li-ion batteries expected to grow in the next five years, the Brighton-based design studio is now planning to collaborate with electric car manufacturers to make sure their waste batteries are given a second life. They aim to release the Gomi Portable Charger made from reused electric car batteries later this year. The Gomi Portable Chargers can now be pre-ordered via Indiegogo. The studio offers free returns, to ensure its chargers are fully recycled at the end of life.